I was ready to trot out this acronym today.  It's not really to describe the protestors destroying properties in the cities around the US, but to describe the "NotMyPresident" people who are just upset Trump won.  Maybe they're moping around their house, crying, or planning to move to Canada (funny how they never want to move to Mexico, isn't it?).

Oppositional Defiant Disorder, of course, is what the left accused the Tea Party and all conservatives of having because we disagreed with Obama's policies.  Rather than having thoroughly reasoned and researched opinions, we were told we're just like toddlers who reflexively say "no".  And racist, of course.

Under the circumstances of the riots in major Democratic cities, it seemed that TODD was a good description.  I also thought it was a pretty snappy acronym, too.

Then I found that Angel beat me.  Angel came up with Trump Acceptance Resistance Disorder, TARD.  TARD is a better word than TODD. 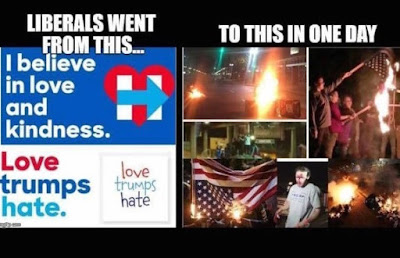