So There I Was, Dripping Blood at the Gun Range

No, it wasn't from a shot.  I wasn't that stupid.  It was from getting my left thumb bit by the slide on my XD subcompact.  Which is stupid enough.

I'm not entirely sure how I did it, other than just saying it was from being uncoordinated.  Being uncoordinated is a lifetime gift of mine that just keeps giving.  If I had tried to be a dancer, say, there would be a string of dead girls, having been crushed to death by my falling on them.

I felt it when it happened, of course, but after I finished the magazine, I put the gun down and realized it was bleeding.  That's when it hit me: for all the times that I've read "have a first aid kit in your range bag" and nodded in agreement, I still hadn't actually put the kit in the range bag.  When I put my left hand down, it started to drip blood.  I had a package of Kleenex in the bag, but couldn't open it one handed.  I interrupted Mrs. Graybeard's shooting to see if she had a band-aid and she went off to look.  Meanwhile, I stood with my hand over a garbage can in case it kept dripping and raised to shoulder level to stop that.  Thankfully she had a good band-aid.

Needless to say, the range bag is getting a first aid kit before it gets put away.  It was a lesson for me; let it be a lesson for you, too.

Aside from that it was a normal, fun day at the range, as they all tend to be.  Very nice weather, maybe getting up to 82 when we left, but breezy.  The range, while outdoors, was quite pleasant compared to even a month ago.

While still on the topic of guns, has everyone seen Mark Serbu's video on the GB22?   Mark is the head of Serbu Arms, a small company in Tampa, probably best known for a bolt action, single shot 50BMG rifle called the BFG-50.  He had the idea that it would be fun to make a dirt cheap, simple gun to turn in when the gun buyback programs come around.  If it costs you $25 to make a gun and the buyback will give you a couple of hundred, you've made out well.  If you can make a couple, maybe you can make enough to buy a real gun if you "work" at it.  He made a single shot .22 from a piece of waterjet cut steel, a 1" square bar cut into two pieces and a few other parts.  Naturally, everyone flooded him with "we want plans" and "we want kits".  The plans were released today and I've already ordered mine.  They're currently planning a kit based on the 80% receiver idea.  I have no idea what the receiver is going to be; possibly the steel frame.  That will have to await a BATFE ruling.  You know BATFE haaaates the idea of 80% guns.  It might be a while. 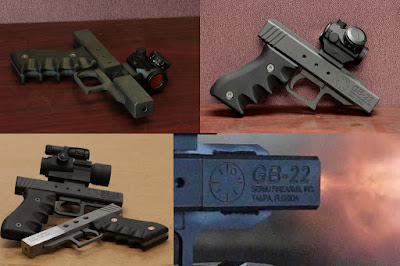 It'll be a while before the big mill is up to cutting steel, but it will be good to have the plans.  Maybe someone will pop up offering waterjet cut steel frames, if those aren't considered the gun.