The biggest thing I want out of President-elect Trump is to return to the real rule of law.  Real constitutional limits.  The rule of "I've got a pen and a phone, so in your face muthaf**ka" has got to go!  Strangely, there's a positive side to Obama's disregard of the law.  As the Conservative Treehouse points out, (Hat tip to commenter Let'sPlay) since most of the appalling, extra-legal things Obama did were by executive order, those orders can be rescinded by Trump almost on day one.  Congress has abdicated their duty to prepare a budget since Obama came into office, first under the Evil Party, but also under the Stupid Party since they took majorities.  Budgets have been by continuing resolutions, debt ceiling agreements (we don't have a debt ceiling - they have never once stopped raising the ceiling every time it comes due).  Ever hear Sean Hannity drone on about the congress not using their "power of the purse"?  This is it.

The only thing that really is going to require legislative action is getting rid of Obamacare.  Unfortunately, my position of " Burn Obamacare to the ground.  Vitrify the ashes and bury them with nuclear waste.  Salt the earth so nothing can grow in it's place." doesn't look like it's remotely in the cards.  Obamacare is the only major entitlement passed in the history of the country along a strict party line vote and if it goes down, it will have to go that way, too.  As Denninger really summarized well, there are vast differences between what candidate Trump and President-elect Trump say, and it's all in the direction of bad. We need free market reforms and Denninger is saying they're just not there.  Now, Dr. Carson has been saying the right things about this on the news shows, but the official papers are what I expect to be the official positions.

The anti-Trump protests are ... you know this already and the media knows this already ... rent-a-mob protests paid for by the usual suspects: Soros and the left wing groups like MoveOn.org that he's behind.  The Gateway Pundit even has pictures of the buses they used to bus protestors into Austin, Texas.  Why isn't the media, especially what most of the protesters would call that hard-right-wing outlet FoxNews; why aren't they telling the truth?  Because media! 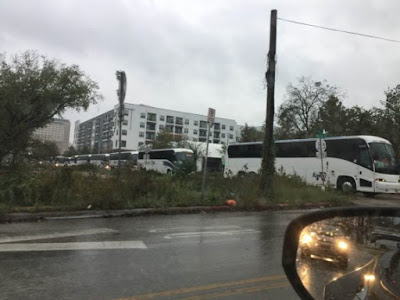 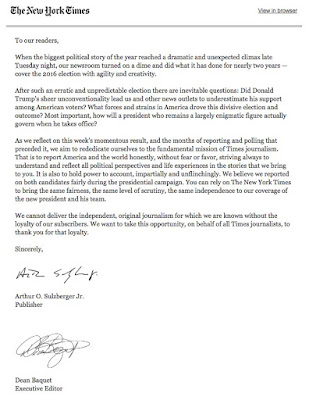 Believing that the Times is going to suddenly be objective would be another example of the same Gell-mann Amnesia one goes through whenever they think the NY Times is right about anything.  Don't believe it for a picosecond.  To enlarge a little on what I said over at Miquel's place


I think what this story is all about is that with the election of a Republican, they think it’s time to turn into government watchdogs again.

Remember the homeless population and the millions of folks who gave up looking for a job?  Haven't heard any sob stories about the homeless or those people working three jobs to support their families in about, oh, eight years, have you?  They’re about to be front page news again. Any sort of government corruption story will be on the front page from  January 20th on.  We're going to go from having an under-appreciated recovering economy to the worst economy since the great depression, like they said while Obama was running the first time.

All that will change back to a docile, lapdog press when another democrat is eventually elected.

In other words, same sh*t, different day.  Don't believe a word in the New York Times.

It's unfortunate that the best reporting on what's going on in America these days come from foreign news sources like the Daily Mail in the UK, or Wikileaks.

And this one, just for fun.