The First 100 Days - God Save Us From Efficient Medicine

Now that we've had a few hours to digest the political history we've seen made, I think it's not off base to start talking about things that should be done.  Among the things we've heard the most often in the campaign was Trump saying he's going to "repeal and replace" Obamacare.

I have a better idea.  Burn Obamacare to the ground.  Vitrify the ashes and bury them with nuclear waste.  Salt the earth so nothing can grow in it's place.  It's going to be difficult because Obamacare is economic cancer: it has tendrils everywhere.  Part of the plan was to weave the laws into obscure places.  And, yes, it was designed to collapse and force everyone into single payer.  If that wasn't transparently obvious to you at the start, about a thousand commentators and another million bloggers (including me) told you. After that, get the Federal government out of health care.  Yes, I'm fully aware of Medicare and the promises under it, but Find A Better Way.  Block grant it, privatize it, do something else.  Find A Better Way.  Medicare is on the verge of collapsing now; I know of few doctors locally who will accept new medicare patients because the requirements are odious and the reimbursement rates are low.  Medicare is rife with fraud, as you'd expect when the government has the biggest pile of money.  Stories are easy to find: "hundreds in Miami"; "73 People Charged"; "The $272 Billion Swindle"... for starters.

You know that you're going to hear that the medical industry needs to get more efficient, but efficiency is close to the last thing you want in medicine.  When you're hurting, or when you get a scary diagnosis, you want responsiveness.  If  you're putting an organization together, efficiency and responsiveness are opposites of each other.  For example, think of your local post office, or perhaps your driver's license office; these are efficient organizations.  You walk in and get into a line of people waiting.  There's a small number of clerks that just works through the line.  They work all the time while you're being 100% unproductive.  Think of calling for technical support.  Those systems manage their call wait time, putting more operators in place when they expect more callers and sending them home if call volume is low.  For contrast, a responsive system is one where you walk in and the workers are sitting around waiting for you.  Ambulance services are often designed to be responsive rather than efficient.   Some of them drive around places in the city where car accidents are common, expecting to be closer to the next call.  If you find a lump where one shouldn't be and your doctor says to get a biopsy, you want responsiveness, not efficiency.  Get it out now, not six months from now when the surgeon has a spot in their schedule.

Our system costs too much for several reasons, but a big one is that the free market is not allowed to work.  Karl Denninger routinely writes that our system is corrupt because our costs are way out of line with the rest of the world (one example).  I see that as a symptom, not the illness.  The illness is the free market not being allowed to work.  There is no price discovery, the balancing of supply and demand, because the people who pay aren't paying their own money in the same sense as when you buy a TV or a car or something.  In healthcare, there's essentially a handful of buyers: the insurance companies that sell the majority of policies to employers and the Fed.gov.  On the other side are tens of thousands of doctors, hospitals, clinics and so on.  That's not a free market of willing buyers and sellers.

A sign of the market not working is that you're not allowed to choose what features you want in your insurance and this has only gotten worse under Obamacare.  As a couple we're both decidedly past 60, yet we're required to pay for maternity coverage.  Neither of us is much of a drinker, yet we're required to pay for addictions treatment.  The only reason I can't leave those coverages out is that the Obamacare authors want my money in the pool to pay for that.  When I buy car insurance, I can choose to leave out some coverages, although my state requires some amount of insurance.  Health insurance has gone from protecting you from risk to paying for everything.  Millions of people get their insurance provided entirely or partially by their employer and have come to think some mystical process pays for things, not that their paycheck is reduced by what insurance costs (both their and their employer's contributions).

It has been said that there are only about three basic different ways of paying for health care: a fully free market, a single payer system like the British NHS or Canadian system where care is rationed by bureaucrats, and a third party system where someone other than the patient pays the provider, so market forces don't really work well and rationing is hardly imposed.  In my mind the fix is more free market and less regulation. Liberals are scared senseless by that possibility because, somehow, the same free market that benefits everything else won't work for health care.  Even though we know for those things that insurance doesn't tend to cover; things like purely cosmetic surgery and LASIK vision surgery, the market has been shown to be reducing costs and improving quality.

From a cost viewpoint, the third system is worst - it's the one we have.  It leads to higher costs which likely means fewer people covered.  A single payer, nationalized system seems to inevitably lead to shortages of care, budgetary problems for the government and (frankly immoral) intricate systems of bribes and kickbacks.  If you want the lowest costs and the most people covered, more freedom is needed. 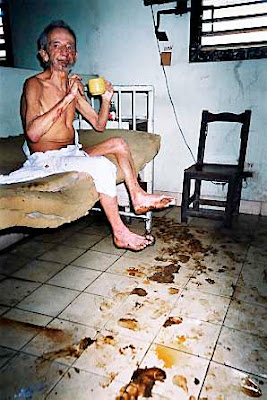 One of those excellent Cuban hospitals Michael Moore thinks we should strive for.