Kasich On Ohio State Attack, "We May Never Know..."

As details started coming in, I was leaving a comment at No Lawyers Guns and Money saying I thought it could be a coordinated terror attack. At that time, the Columbus Dispatch was still calling it a shooting.  The reason I said "terror attack" was there was an report that someone called in a report of a fluorine leak and students evacuated to a patio where they were then attacked by someone in a car.  Could it be the report was called in by the Sudden Jihadi or an accomplice to get the students into a place where he knew he could attack?


Peter Anderson, chairman of the department of materials science and engineering, said he arrived at Watts Hall after the attack was over.

He said students told him that someone called in a fluorine leak in the building, which has lab facilities. As required during emergencies, the students congregated in the courtyard outside the building.

He said the attacker drove a car into the courtyard. “It’s where we hold our ice cream socials and when something like this happens,”Anderson said.

By the time I was reading this, 12:30-ish, there were reports of people being slashed and taken to the hospital for injuries from being hit by a car, but no reports of anyone being shot.  As the events started to be reported more accurately, it sounded more and more like the sort of "open source terror" that Isis was encouraging just last month.  Since we know he was interviewed in the campus newspaper complaining about a lack of prayer rooms on campus, I'm going with "Sudden Jihadi Syndrome" for $500, John Kasich.

After June's Pulse night club shooting in Orlando, officials were quick to say "we may never know why the killer did this", all the time sitting on 911 audio of the killer saying he was doing it for Isis and their leader.

In the aftermath of the Pulse nightclub shooting, the leadership of a couple of Florida Sheriff's Departments got together about the message that has been preached about mass shootings: Run, Hide, Fight.  Like so many of these glib solutions, it became something that was easily memorized and so became the default response of many in the Pulse nightclub.  What they did was hide in places of light concealment, like in bathroom stalls, and not cover.  The killer reloaded time after time and not once did anyone attack him.  He took his time methodically killing the victims hiding, as they were told.  Those poor folks ended up simply waiting to die and were executed for their trouble.  In its place the department came up with the "Four As":  Awareness, Avoidance, Arm, Attack.
I find it hard to find fault with any of this.  If students were allowed to carry on campus, it might have gone better, but to be honest, it went pretty well.  If the jihadi really did call in a false report on a fluorine leak to get people out where he could kill them, he screwed up by not realizing there would be OSU police at the scene.  One of those officers, Alan Horujko, put down the attacker within a minute. 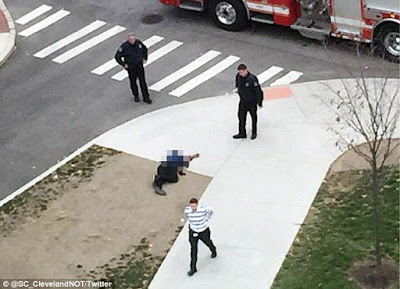