When did "black Friday" become a national holiday?  When did it go from a semi-official start of the Serious Christmas Shopping Season and turn into a Competitive Shopping Event?

Black Friday was supposed to be called that because it was the day where businesses turned their annual ledgers from red ink to black ink, but in the last few years, and especially this year, it seems to have morphed into something else.  I think I started getting email ads touting black Friday back in July.  Amazon did some sort of promotion like that, for sure.  (Prime Days?)  The term Black Friday started getting saturated toward the end of last month and since the start of November, just about every ad has been headlined that way.  It has been reported for years that the big deals aren't necessarily really deals at all, or that some companies raise their prices in the weeks (months?) before the day so that what would have been a normal, small discount from MSRP suddenly seems like a deal.  It's being reported that more and more people are carrying their smartphone into the stores to price check things, check for price and availability at other stores, or get coupons.

But shoppers like to think they're getting big deals, and there are stores that put one or two items on a massive discount to get some people to line up the night before.  Maybe they can get some buzz on the news.  Of course, now that stores are opening on Thanksgiving itself, that loses some drawing power.  Still, every year there's some incident where people get violent over something stupid.

It always pays to know what going prices are.  I've heard that generally speaking, the best time for deals is closer to Christmas, especially right before Christmas.  You're betting that the stores will be stuck with some of an item you want and would rather discount it than not sell it.  If they sell out you lose.  If they don't sell out and don't cut the price you lose.  It has worked out for me in the past.

Retail is rough.  Do you ever find yourself looking at the milk or eggs or something and reaching for the back to see if you can find one with an expiration date that's farther out?  What if stores could, in real time, lower the prices on the ones with the closer expiration date?  Would you buy it despite the closer expiration date if it was cheaper?  What if they could adjust prices on the fly based on demand?  Nobody's buying the chicken pieces with tomorrow as the expiration date, so drop the price in half?  Conversely, more people are buying the Kerry Gold butter than expected, so raise the price a little?   That's risky behavior for stores, and (AFAIK) they're simply not set up to do such things, but it seems like a possible future direction. 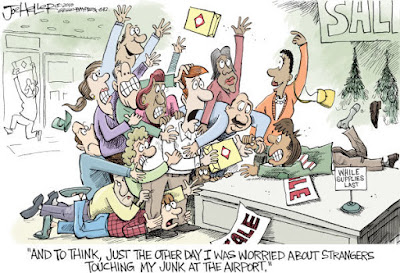