Through a Window Darkly

One of the things most of us said about the coming election was that we were dead sure that Hilldebeest would have been a disaster, but how Trump would govern was a virtually complete unknown.  As we're getting a glimpse of the coming policies, in the same way you might start to see an outline of an approaching car through dense fog, more details are starting to emerge.

On the positive side, hat tip to No Laywers - Only Guns and Money, we're getting a better picture of his first priorities on the second amendment and it's mostly good.  While he makes no mention of removing silencers from the NFA or eliminating the BATFE, two of my favorites, he does say (editing for brevity):


GUN AND MAGAZINE BANS. Gun and magazine bans are a total failure. That’s been proven every time it’s been tried. ...The government has no business dictating what types of firearms good, honest people are allowed to own.

BACKGROUND CHECKS. There has been a national background check system in place since 1998. ... What we need to do is fix the system we have and make it work as intended. What we don’t need to do is expand a broken system.

NATIONAL RIGHT TO CARRY. The right of self-defense doesn’t stop at the end of your driveway. That’s why I have a concealed carry permit and why tens of millions of Americans do too. That permit should be valid in all 50 states.

MILITARY BASES AND RECRUITING CENTERS. Banning our military from carrying firearms on bases and at recruiting centers is ridiculous.

The whole position paper is here (pdf warning).  I can find fault with parts of this, especially the priorities chosen, but is good overall.

Economically, unfortunately, the picture is more bleak.  On the positive side,  I like the idea of reducing the corporate tax rate from 35% to 15% for the same reason that linked Irish news site is writing about this plan: the idea is to prompt American companies who moved to Ireland and other places for lower taxes to come back to America.  For those of you new to this blog, one of my first principles in thinking of these things is to ask "and then what happens?".  In this case, you can be sure other countries will drop corporate taxes to reduce our advantage and sway those companies. That will even help businesses in places where they don't believe in it. 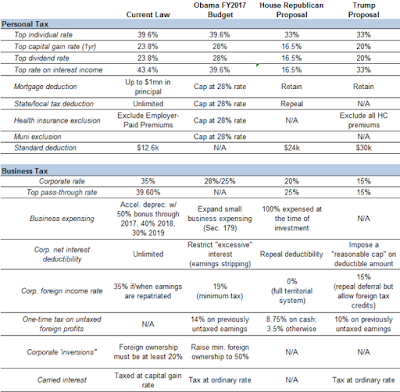 You can see portions of Trump's proposals are not well defined or not addressed at all, which I assume means they're negotiable.  In general, of course, lower tax rates don't lead to lower tax revenues because the economic activity shifts to individuals.  Lower rates can lead to higher tax revenues.  Money spent by individuals has a multiplier effect: spending a dollar at the local pizza shop increases their business, which can lead to them expanding the shop - or at the very least, the owner taking home some more money which they spend.  It has been shown in a handful of recent studies that the growth multiplier of government spending, always assumed by Keynesians to be positive, is actually less than one (called negative): it causes economic contraction, not growth.  It's better to let people spend their own money than take it as taxes.

On the negative side, there's talk of $1 Trillion in infrastructure spending and fiscal stimulus.The plan is presented as "privately financed but encouraged by tax credits".  More specifically, it calls for $1 trillion of spending over 10 years to be funded largely by private sources which would be repaid with tax credits and usage taxes (i.e. toll roads).  Which brings to my mind the usual question of where we get that money.  With the total national debt at $19.8 Trillion, and the demand for bonds driving the yields down into negative territories, one has to wonder how big the appetite for US bonds is (demand for bonds raises prices and lowers interest paid - their yield).

To put a short summary on this, while some of Trump's proposals are fine, I see nothing to change the opinion I know I've talked about many times: that our economy is due for a real bad turn.  Severe recession again, or outright collapse, I can't say.  I don't think the chance of recession is 100%, like Bill Bonner's firm is saying, but that's just because I never assign either 0% or 100%.

Posted by SiGraybeard at 3:13 PM