Conflicted on the Election

Tomorrow is election day.  In some states, tomorrow is the only day to vote (except for absentee); but in the majority you may participate in third world-style early voting.  As you may gather from that quip, we're old school and will be voting tomorrow.

The rest of this is peculiar to Florida and local politics so those of you who are reading in other states are probably not going to be interested.  See you tomorrow.  According to blogger, after the US, the nation that consistently places second as viewers to my blog is France.  Pourquoi?  Je n’ai aucune idée.  I'm sure nothing here will be interesting to readers in France.

I've done all the study and prep that I can for our election, but there are still two things I'm conflicted on: a constitutional amendment and a local ballot initiative to add a 1/2 cent sales tax dedicated to cleaning up one of the biggest estuaries in the country.

The amendment, #1 on the ballot, is usually called the solar power amendment.  You'd think all the ecosexual greenies would all be behind this, right?  As it turns out, the enviro-weenies are almost all against it.  They think it's a Trojan horse intended to kill solar polar.  Why?  It seems to be because the electric utilities have invested a relatively large amount of money in promoting it and the greenies just know the power companies want to enslave their customers and burn more coal.  In fact, if you read a list of who's for the amendment and who's opposed to it (like this one) they're almost exactly the opposite of what you'd think.  Al Gore is against it, along with virtually all the lib icons in Florida.

I had originally decided to vote against it and the reason I wanted to vote "No" is has not been mentioned by either pro- or anti- amendment 1 sites.  To borrow a snippet of the wording from our county ballots, let me give you the phrase that bothers me.


... and to ensure that consumers who do not choose to install solar are not required to subsidize the costs of backup power and electric grid access to those who do.

Aside from my general dislike for Florida's tendency to pass constitutional amendments for anything, what bothers me about this the most is what it doesn't say.  What it says, and the full, exact language with definitions is here (pdf warning), is that (1) consumers who don't choose to install a solar electric system are not required to pay for (subsidize) power flowing to solar-paneled homes when it's dark or cloudy or when they're otherwise are not producing enough energy; and (2) consumers are not required to pay for (subsidize) running the electric grid to solar-paneled homes that need to be connected to the grid and are too far from powerlines.

All well and good.

What it doesn't say is that we're not required to pay for installation of the solar panels themselves and that's a significant cost.  We have a backup generator that runs on natural gas.  When we installed it a while after the '04 hurricanes I was very interested in solar panels for many reasons and shopped systems.  My 17 kW generator cost in the vicinity of $8000 when everything is included.  10 kW of solar panels was going to cost over $60,000.  59% of the power at 7 1/2 times the cost.  That $60k included federal subsidies.  I don't want to pay for other peoples' solar panels either way.  Running powerlines out to remote places is expensive, and I don't want to pay for that, but most people are close enough to a power pole that it seems the most expensive thing for most solar panel users will be buying their systems.

If I were a lawyer trolling for income, the first thing I'd do if this passes is sue the utilities to subsidize installing panels for anyone who wants free money.  I'm sure they'd argue that if the amendment doesn't forbid it, it must be permitted.

That said, this is one of those cases that maybe shows the best reason to vote for it is by looking at who says to vote against it, and I think I'll end up voting for it.

The other one I agonize over is to approve a temporary sales tax of 1/2 percent just for our county to implement a $300,000 plan to help fix the Indian River Lagoon.  This one means a lot to me because the River (as we call it) is in sad shape and desperately needs help.  Fishing is another outdoor sport I really enjoy, and in the last couple of years - especially the last year itself - the condition of the river has gotten desperate.  In just this calendar year there have been fish kills, dolphin and manatee kills, brown and green algae blooms.  Clarity of the water column has gone from 6 to 8 feet down to 6 to 8 inches in some measurements.

Ordinarily, I'd probably vote for this.  Yeah, it bumps our sales tax from 6 to 6 1/2%, but doing nothing essentially makes my boat and fishing tackle worthless.  In the 80s, we used to launch our little aluminum boat out at a nearby city park, go to some spots we knew of that are literally within 5 miles of my door, and catch as many fish as wanted, releasing virtually everything, except for the occasional day we'd take home something to eat.

Let me quickly add that I don't think my neighbors have any responsibility to pay for my fishing, just as I don't feel any responsibility to pay for my neighbors' solar panels.  The impacts of the river go far beyond my personal sport fishing and effect everyone in the county (which largely parallels both of its shores).  The economic benefits add around $200 Million to the county yearly, while if the River were to collapse into a dead zone, that would cost the county more than just the loss of tourism; they estimate a loss of $135 million a year.  Losing $135 Million instead of making $200 makes a $335 Million swing in the wrong direction.

On one hand, the county instituted a study to determine how to improve things and a plan was put forth (pdf warning).  Unfortunately, they didn't publicize this well enough and I didn't know about it until the proposal was in.  I don't know if they looked for local input.  As a result, after reading those 78 pages, I have misgivings.  The first one is: how do they know this is going to fix it?  Sure I realize these are "professional scientists and experts" in this area, and that frankly doesn't mean much to me.  I think we've all heard the expression that "no battle plan ever survived contact with the enemy" and I fully expect that here.  To borrow another phrase, this time from Donald Rumsfeld, the project is going to face both known unknowns; things they know they don't know, and unknown unknowns; things they don't even know they don't know.  If they get five years into the plan only to find it isn't working, and then need to come back to ask for more money, will anyone in the county believe they know what they're talking about?

On the other hand, because they went off and did this without much discussion from the public I don't know if anyone asked these questions, but is this the best way to fund this?  The majority of the effort has to be to remove nutrients in water runoff, like rain water causing fertilizer runoff (both suburban and farms); they need to replace all the old, leaky orangeburg sewer pipes and leaking septic tanks. Since that impacts all voters, they should be involved in the process.   Is half a cent enough?  Do they need to do a full penny increase?  Would trying to attack the problem faster help or hurt?  Should there be ways to focus the taxes on those who want to use the river more, or who live along the river?  They already pay more taxes because riverfront property is more expensive.  If the river collapses into a dead zone, their property values will collapse.

The plan focuses on removing organic matter from the river bottom, including dredging muck from the bottom (which, by the nature of dredging, can only affect that spot in the river, not the whole system).  Yet I've read many people over the years who maintain the causeways that cross the river in several places along its 70 mile length in our county impede the water flow and it would help immensely to replace them with bridges.  That would be extremely costly, but does it need to be done?

The biggest objection I come across to this is that our local politicians are too stupid and too corrupt to manage this.  That could be.  I've already heard that the group that's going to manage the project has been formed and people from around the county with records of unethical behaviors are already in place.  Of course, if we plop $300,000 in one place, that's going to attract grifters like ants to a picnic.

So color me conflicted on this one.  At the worst, I can only say it may not be enough to fix the river and some money will be lost to cronyism.  On the other hand, it's very likely better than nothing. 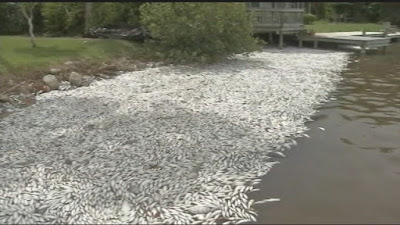 One view of one of the fish kills, from March this year (source).