(continued from a piece three years ago)  The question is whether the coming economic crisis is inflationary or deflationary.  Does the economy go out in a raging fire or freeze to death?  I've been reading everything I can access on this for about 15 years, and have written on it here many times in the six + years I've been blogging.

I still don't know for sure.

Today, we get input from David Stockman, host of Contra Corner, Director of the Office of Management and Budget under President Ronald Reagan, and economic iconoclast.

David doesn't give a "take-it-to-the-bank" prediction either although he is clear in what he thinks is going to happen.  He outlines two possible paths and what he predicts in an interview with Bill Bonner.  To set the stage a little, let me give a couple of reminders for regular readers and pieces of information for newbies.

In 1971, when Nixon closed the gold window, he didn't simply make the currency in circulation not redeemable in gold (if you're old enough, you'll remember money marked "silver certificate" or "gold certificate"; the currency actually said you could redeem the bill for silver or gold as appropriate).  Nixon's move made our currency worth simply what traders agree it's worth.  If I offer you a dollar for some fruit from your tree and you agree, that's what a dollar is worth.

In the place of the precious metal backing, the dollar came to be defined as a debt obligation.  Banks loan new money into the world ex nihilo – they create it out of thin air to lend out. Without those new loans, the money supply falls as old debts are settled, so lending more becomes the only way to keep the economy appearing to grow.  It has been estimated that debt must increase by at least 2% a year or the economy will fall into recession.  For the last 35 years, the trend in interest rates has been to come down… in order to make borrowing easier.  Now, there is plenty of debt in the system – $85 trillion in the U.S. alone when we combine personal debt with government debt – but not much room left for interest rates to go down.  In some countries, interest rates have gone negative, essentially a fee for not spending money.  In the US, rates are negative in real terms (the interest rate is lower than inflation) but they haven't taken the extra step of showing a negative sign on the federal funds rate.

The central banks have responded with massive monetary policy; quantitative easing rounds QE1 through QE4 and all sorts of other tricks (QE "to infinity and beyond!").  Now it's time to give David Stockman's observation:

You may have noticed that since Trump's win that 10 year bond yields have suddenly shot up: 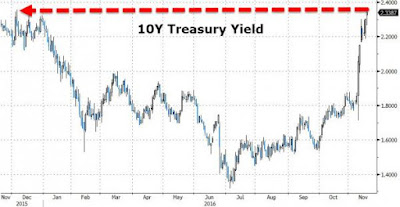 Since bond yields (the interest they pay) are inversely related to the price, that means bond prices are falling.  They're falling because demand is falling: buyers are putting money into equities - the stock market and not bonds.  Why?  They're betting on inflation.  Bond yields have to go up to try to tempt those buyers back.


The “reflation trade” – betting on rising stock and commodities prices and falling bond prices – is a gamble on inflation; it is a bet that Mr. Trump will rotate from monetary stimulus to fiscal stimulus.  Long term, we think it’s a good bet.

Stockman seems to think it's going to end in deflationary death spiral.  Instead of "draining the swamp", Trump's going to get eaten by the gators in that swamp.


Either Congress goes along with Mr. Trump and the credit bubble ends in an inflationary blow-up…

…or it holds the line – refusing further fiscal stimulus – and the result will be a deflationary disaster.

There are, of course, more twists, turns, and nuances in this plot. But that is the basic storyline.

Stockman believes the swamp will swallow up Mr. Trump, his army, and his big budget plans.

“I’ve seen it happen. There are alligators in that swamp,” says David, showing his scars.

In more succinct terms, Stockman believes the establishment will beat Trump back and we'll fall into deflationary collapse.  Remember, he recalls, “Ronald Reagan’s program didn’t survive. Neither will Mr. Trump’s.”  I'm not as pessimistic.  Trump has routinely beaten all prognosticators in the last year or 18 months.  I'm not willing to bet everything the system will beat him.  He might just eat those alligators! 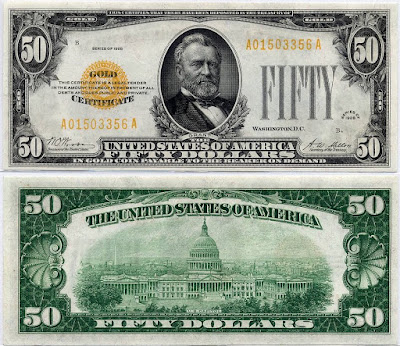 For those who never saw one, a US $50 gold certificate from 1928, "Fifty Dollars in gold coin payable to the bearer on demand" along the bottom.