July 31st is the birthday of Milton Friedman (1912-2006), one of the giants of American Economists and called, "the Godfather of Conservative Libertarianism" - hat tip to Ammo.com who regularly sends me ideas for posts.


Milton Friedman is the Godfather of American conservative libertarianism.  He was, at a time when it was deeply unfashionable in official circles, a fierce critic of Keynesian economics. He was a leader of the second generation of libertarian economists to come out of the University of Chicago. Among the people recruited or mentored by him at the university include Thomas Sowell, Gary Becker, Robert Fogel and Robert Lucas, Jr. Friedman often used the jargon and methodology of Keynesians while rejecting their basic premises, coming to very different conclusions than his Keynesian counterparts.

I know that over the years I've devoted hundreds of articles to bashing Keynesian economics as opposed to the older ideas of money being tied to a physical standard, whether the silver or gold standards that go back the hundreds of years of paper money (before that money often was only silver or gold coins), or to something more late-20th-century like a combination of commodities.  Almost anything except for money created created out of thin air.  I just know of no historical examples where fiat money has survived long term - the world has been off even the most perfunctory gold standard for not even 50 years and the signs of economic "mess" are everywhere.  Fifty years isn't "long term."  John Maynard Keynes himself once famously said, "The long run is a misleading guide to current affairs. In the long run we are all dead", as a counter to the argument that his policies would lead to destruction in the long run.

For those unfamiliar with the term, a fiat means "a command or act of will that creates something without ... further effort" and when used in the term "fiat money" means money declared to exist, not something that is inherently valuable to people.  We can buy things with paper dollars because people believe them to be usable for exchange, but in the future those dollars are generally worth less.  I can see why that's the case in one of the few things I disagree with Friedman about.


One of his groundbreaking theoretical innovations is the notion of a natural rate of unemployment. Friedman believed that when the unemployment rate was too low, inflation was the result. Using this and his unique interpretation of the Phillips Curve, Friedman predicted “stagflation” long before there was even a word for such things. Friedman likewise broke with Austrian orthodoxy in advocating for small, controlled expansions of the money supply as the proper monetary policy. This became known as “monetarism” – the theory leveraged by the Federal Reserve during the 2008 financial crisis.

To be more specific, Friedman showed the Phillips Curve (which states that low unemployment tends to push wages higher, a simple example of supply and demand) was only true in the short term.  I'd argue that the appearance that it's not true in the long run can be because of Friedman's belief in “small, controlled expansions of the money supply”.  Simply, over long terms, that expansion of the money supply itself causes the number of dollars required for everything to go up masking any rise in wages.  Also known as monetary inflation.  (And anyone who thinks the Federal Reserve's expansion of the money supply after the 2008 collapse was “small and controlled” really needs some lessons in perspective).

Still, I'm being stupid as an engineer and some dood with a blog on the Interwebs to disagree with a Nobel Prize winning economist and one of the greats of American History.  It just means I'm a little more like a “classic Austrian” than Friedman was. 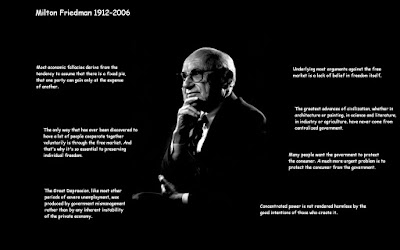