Quite possibly the most irrelevant factoid is about American billionaires.  I think I first heard a version of this around the time that Occasional Cortex was saying there should be no billionaires; that the existence of billionaires is somehow immoral - as if by amassing their fortunes they somehow took food out of someone's mouth.  The factoid is that:


Three US billionaires are now collectively worth more than the 160 million Americans in the bottom half of the wealth distribution. ... few of the bottom 160 million hold any stocks or bonds.

It's not that the factoid isn't true; I'll accept it at face value.  It's just that it's totally meaningless.  To borrow an observation from Daniel C. Jensen, writing for FEE (the Foundation for Economic Education):


If you know a couple of basic facts about the United States population, you know it's not worth quoting. It might be a fact, but it's so meaningless that it’s actually deceitful.

That 50% also includes young adults who are in prolonged college; people going for medical doctor, lawyer or Ph.D. degrees.  It includes prisoners, the disabled and other groups dealing with challenges (whether the consequences of their decisions, or the misfortunes and vicissitudes of life.

Like most hate and envy directed at "the rich", or "income inequality", this is just intended to rile up the masses to revolt, or more specifically, vote for more Democrats.  According to the data here, if we took the combined net worth of the 20 richest billionaires in America - not their income, their entire net worth, reducing them to living on food stamps - we get $1.04 Trillion.  That would run the federal budget for about three months.  Or they could give every man, woman and child in the US about $3250.  And when that's gone, there's no more.  According to Forbes, the net worth of all the billionaires in the world is $8.7 Trillion.  Of course, American Democrats have no claim at all on any of this money, whether they're US citizens or not, but even if they somehow took that, again reducing every billionaire in the world to living on food stamps, they have enough to run the country for two years.  But that $8.7 T pales in comparison to the $22.5 T debt and $125 T unfunded liabilities.  And that pales in comparison with what they want to spend in "free tuition", "medicare for all", and all the other crazy campaign promises they keep spreading.

All the money in the world isn't enough to pay for what they want. 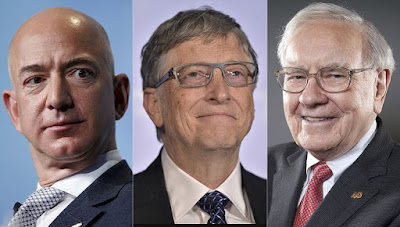 The three billionaires they talk about: Jeff Bezos, Bill Gates, and Warren Buffett.