Branching Out in Barbecue

I've blogged lots of content about barbecue over the years, and specifically about "low temperature, slow cooked, with hardwood smoke".  Most people associate the word "barbecue" with grilling; cooking over high temperature fire.  With the exception of some wood smoke it's the complete opposite of barbecue - and some gas grills don't allow a way to get smoke flavor (from what I hear - never had one).

The truth is, I enjoy grilling, too.  My last grills, though, rusted out and needed to be hauled to the curb well over a year ago.  One was a large combination grill/smoker with a side box for the wood fire, sort of like this model but I'm sure an older version.  I could never get that to keep a good low temperature for smoking, and it consumed mind-boggling amounts of wood, but it was a decent grill.  My grill was a Weber kettle grill, their bottom end model like this.

This summer, we treated ourselves to an upgraded Weber 22" Premium grill, which has some convenience features I'm learning to like.  I spent all of last summer waiting for them to go on sale, only to find out they pretty much don't.  At least, not usually.  If you want one, you pay what they're asking (or find one used).  I did our first grilling on it a couple of weekends ago.

Why the kettle grill?  Because it's capable of being a smoker and a grill - which could thin the herd in the garage.  To grill or sear, you pile coals up in the center of the grill and cook in direct heat; to smoke, you put the charcoal around the perimeter of the grill and cook by indirect heat.  A popular version is called the "snake method".  Coals are arranged to be lightly touching each other along the seam between the grate your briquettes sit on and the walls of the kettle.  You light a few pieces of charcoal and then place them at one end of the "snake" of carefully stacked charcoal. 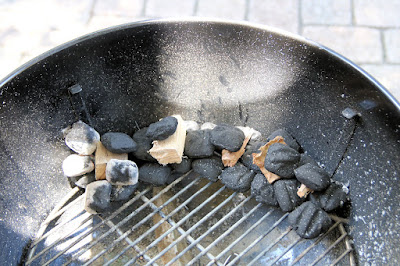 You can see four ashed-over pieces of charcoal on the left that came out of a charcoal starter.   The snake is about 1/4 of the perimeter of the kettle with two coals in touching rows on the bottom and one row down the middle of those and on top of them.  In between are some chunks of hickory to add those flavors.

This shot is from this afternoon, the first time I've ever attempted to smoke something this way.  I thought it would be good to get a feel for how the temperature regulates, and how long it takes to use up a quarter of the circumference of the bowl.  So what to make?  What to make?...  Something easy to whip up, tastes good, and is pretty darn easy to cook.  A fatty!

This one is a one pound package of pork sausage, filled with provolone cheese, Genoa salami and a spinach/kale blend.  Rolled up and wrapped in bacon weave - as they have to be. 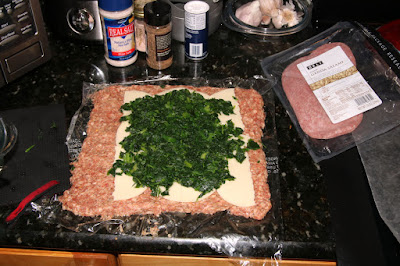 I forgot to take a "before" picture but this one is before adding the salami and rolling it up, so half-stuffed.  And here's the "after" pic. 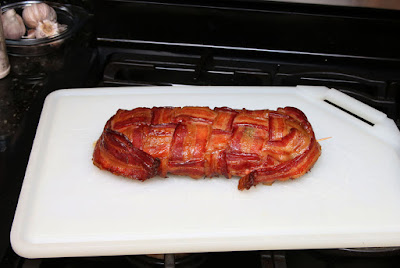 The 1/4 perimeter of the grill lasted three hours.  I think I can get more than 3/4 of the circumference but it's not possible to get the full thing.  You can only light one end, so there has to be some amount of gap.  If the coals don't need to be fussed with, that's 9 or 10 hours of smoking.  By limiting the number of coals that will burn at once, the kettle doesn't get very hot.  It stayed in the range of 220 to 240 for the three hours as measured by the built-in thermometer in the lid.  I experimented with adjusting air flow to lower and raise temperature and that worked as it should.

There are alternatives to doing a snake method smoking session, although a search of YouTube shows many videos.  There's a very popular commercial product, the Slow 'N Sear  and people have made their own versions of this idea.  I can see the advantages of doing this.  Those coals seen in the top picture get a grate over them where the food sits; that means that if you need to do something to the coals, you have to take off the lid, the food and the grate.