The organized left has shown again how despicable they are as human beings, this time doxxing, harassing and organizing death threats against 8-year old Ava Martinez who has been having fun doing parody videos as "Mini AOC".  When they started getting calls to their personal phones, her parents decided prudence demanded they pull her content off the web.  Which, of course, is going to teach the left that their antics worked and will be repeated until someone stands up to them.

The girl's stepfather, Salvatore Schachter, took to Twitter to explain why all of Martinez's accounts were suddenly deactivated and all content was removed: 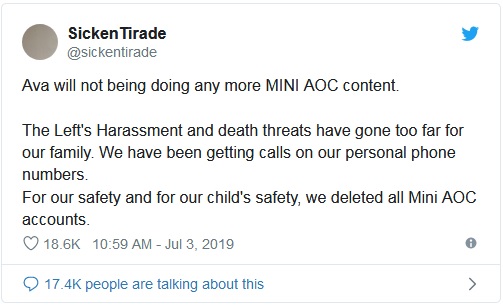 According to the source article (at Townhall.com by Beth Baumann), this tweet parodying AOC's visit to a parking lot was still on twitter when she started on the story.  I just checked the account and it wasn't there. 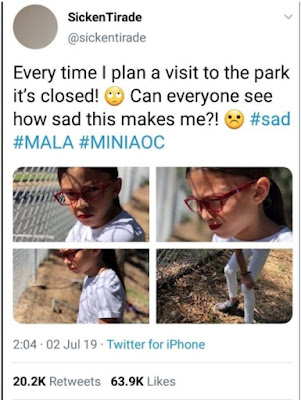 There are, as of this writing, three videos on YouTube at a channel by the same name (Sicken Tirade - two words in this case).

Schachter says Ava is disappointed but the whole thing was more motivated by her desire to be an actress, not her political senses.


"She's disappointed at not doing Mini AOC going forward but we explained that this is for the best and she's okay with it," Schachter said. "The world has seen Ava's beauty, talent, and charm, which was the whole reason for Mini AOC to begin with and no amount of hate or anger will change that. Also, like Ava says, 'try using your words.'"

Beth Baumann at Townhall emphasizes that the leftists doxxed and threatened a little girl, and while it does take a certain level of "scumbag of all scumbags" to threaten a little girl, I don't really much care if they doxxed her or her mom and stepdad, Schachter.  Free speech used to be something much more of society agreed on but is now under constant assault from the leftists.  This is just another example.