I Feel Sorry for the Women's Soccer Team

Probably not the way you think.

I feel sorry for them because they come across as horrible whiners.  The kind of people I don't want to be around.  Nothing is ever good enough for them.

They've just won what should be the ultimate victory of their careers (and I gather some of them did it four years ago, too).  They're the world champions, having gone through the tournament without a loss.  They should feel on top of the world.  They should be sky high with happiness; perpetual giddiness for days.

Instead, all we hear out of them is about victimhood; about how they earn less than the men and it's unfair.  In the case of apparent team spokesperson Megan Rapinoe, we hear how much she projects hate onto President Trump.  Their parade in NYFC seemed to be about grievances and not joy.

The women got 13% of the pool, while the men got 9%; that is, the women got 44% more than the men.  Because the men's pool was over 50 times bigger than the women's pool, the men's smaller percentage turned into a bigger number of dollars.

I don't follow soccer - men's or women's.  Much like I don't care what any male athlete earns, I don't care what any of them earn.  The root cause of the disparity in the money between the sexes is that the men's sports are more entertaining, because the men play a more dynamic game.  Even Serena Williams, one of the greatest women's tennis players of the last 20 years, said the men's game is better.


Despite having won 23 Grand Slam titles, Williams, in a 2013 appearance on “Late Night With David Letterman,” said, “For me, men’s’ tennis and women’s’ tennis are completely, almost, two separate sports. If I was to play Andy Murray (then one of the best players in the world), I would lose 6-0, 6-0 in five to six minutes, maybe 10 minutes.”

(To be honest, I always thought that with her musculature, Serena could play Free Safety in the NFL.  Except for almost certainly not having a clue how to play football.)

If they're trying to woo everyone in the country to support knee-jerk legislation ideas like Chuckie Schumer came up with to pander to them, count me out.  What the women need is for a generation of kids growing up now to become paying fans of women's soccer.  Attracting more ticket sales is the only answer.  Nobody playing today will benefit from that. 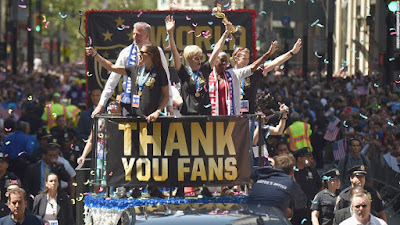