British Physicist and Radio Amateur Revolutionizes How We See the Ionosphere

The American Radio Relay League relayed the news this week that British Physicist Cathryn Mitchell, whom the ARRL says is known to fellow hams as M0IBG, was awarded the 2019 Edward Appleton Medal and Prize.  Her work sounds fascinating to me and I had to dig a little further.


Mitchell innovated a completely new Earth observation technique by adapting medical tomography to image the Earth's ionosphere, thus revealing the dynamics of the near-Earth space environment. Her use of Global Positioning System satellite signals as a source for space weather tomography, through a new time-dependent mathematical inversion algorithm, has given us the first global-scale view of the ionosphere in response to space weather storms.

Mitchell's research has fundamentally changed our understanding of the Earth's ionosphere, revealing dynamic processes driven by magnetospheric electric fields causing enormous plasma enhancements and uplifts and has led on to ionospheric data assimilation and forecasting.

Naturally, I went in search of some images based on this new technique; which isn't that new, but that I hadn't heard of.  Nature had an article re-evaluating the ionospheric electron density during an ionospheric storm on August 5 and 6, 2011 using the technique and existing data. This is a reconstruction of the data by time (left to right then top to bottom), altitude and geographic coordinates. 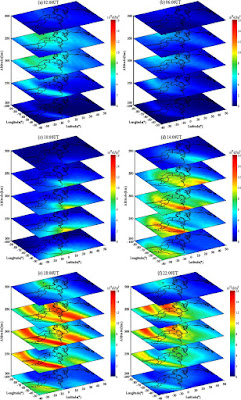 I'd love to see animated 3D graphics of the ionosphere showing these electron densities, varying over time and reconstructed into continuous vertical clouds.

I've been interested in the ionosphere since I first learned about it back when I was 12 or 13, so naturally this got my attention.  I thought some of you might it interesting, too.  Note at the end of writing this piece, I thought it would be a good idea to check the callsign.  While she isn't listed on QRZ.com or any of the call lookups I can find, there is a reference to her on the Radio Society of Great Britain's Propagation Studies Committee with that call and a HamSci.org article by her.  The QRZ omission is probably an error in the license database.