The Revolving Door Between Core Democrat Officials and Social Media

With the widespread de-platforming of conservatives and alternate voices from Alex Jones to Steven Crowder to YouTube gun channels, a lot attention has been focused on how Facebook, Google/YouTube, Twitter and the rest of the Big Social are eliminating conservative viewpoints.

A remarkable piece of investigative journalism appeared today on the website Spinquark - which I'd never heard of and only learned of by coverage on Glenn Beck's radio program today.  The article investigates the revolving door between the power players in the Democratic Party inner circles and the top levels of the social media platforms and is called "Welcome to Social Government".  The most common former employer was the Obama administration or campaign.  The second most common former employer was the Hillary Clinton campaign.

It's long and it's important.  As usual, let me snip some pieces to whet your appetite.


How is it that Facebook, who refuses to dox any of the violent Antifa terrorists that use its platform, are happy to give up the personal details of the Facebook user who anonymously uploaded a slowed video of Nancy Pelosi, within minutes, to some rando journalist on the phone? (How do you even call Facebook?)

There's more in that paragraph - and that's just one example.


How about YouTube? How does Laura Southern's documentary about the border get removed from YouTube within 24 hours of posting without any reason or explanation? What if I told you a Policy Manager at YouTube, before becoming a Policy Manager at YouTube, was employed by Hillary for America and was a manager in Obama's campaign before that? What if I told you YouTube's Global Content Policy Lead previously worked at the DNC? Did you know the person responsible for "growing the next generation of stars" on YouTube worked in the Office of Digital Strategy at the White House under Obama? Or that the person in charge of developing the careers of YouTube creators was the Director of Video for Obama? Speaking of helping the careers of creators, did you know Vox, the company that got Steven Crowder demonetized, was one of the companies that YouTube doled out $20 million dollars to, for 'educational videos'?

Ten people, directly connected to the progressive Democrat political machine who are now controlling our conversations online. Sounds like an important alarm, no?

What if I told you there were nearly a hundred more?

From there, he goes to Twitter and finds the same sorts of links.


What about Twitter? The "primary spokesperson and communications lead for the 2016 U.S. Presidential election" at Twitter was previously Kamala Harris' Press Secretary. A Trust & Safety manager who "developed operations and policies related to privacy and free expression" previously worked at the Clinton Global Initiative and at the State Department under Hillary Clinton. A Twitter Director of Public Policy was originally a Press Secretary for John Edwards (D), and Erskine Bowles (D), and Senator Salazar (D), and Senator Barack Obama (D), he was a Policy Director for Obama's Presidential campaign, a Policy Advisor at the White House, Special Assistant to the President, and then he spent three short months on the Clinton-Kaine Presidential Transition Team before deciding to take a job directing public policy at Twitter.

You probably realize that this is no coincidence.  After the 2016 election, one of the lessons that Democrats thought they learned was that Trump's campaign used social media better than Hillary's team did.  The obvious conclusion was they needed to get better at social media!

Just kidding.  Work at getting better?  Don't be silly!  That's too rational and even has the wretched odor of free markets.  The obvious conclusion is to bar anyone with conservative sounding ideas from social media!  The government can't do that, but these private companies can remove whomever they want from their platforms, so all these Democratic insiders rushed to be executives in social media companies. 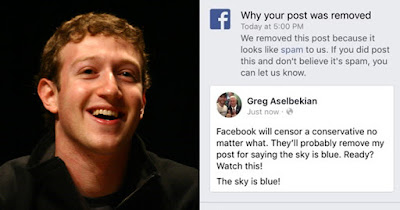 In the beginning of the conclusion, Spinquark talks about the big picture.


Progressive Democrats using social media companies to stifle our free speech online should be the most important discussion of this generation. Who has the power to silence Americans at YouTube, Twitter, and Facebook? Who are the people setting up the guardrails to our free speech?...

Does their monopoly status require they undergo more Federal regulation to ensure access?  Is access a "civil right"?  (This guy at Human Events thinks so)  It really is the big argument of our day.

For those who are regular readers, or who are but haven't picked this up from me: these are private companies invented and developed by individual citizens.  They have every right to kick anyone and everyone off their platform.  Further, the leftist leaning politics of Silicon Valley companies should be apparent to anyone - which means they'll attract these Democrats.  My solution is to not use Facebook or Twitter and just use YouTube and Google for the few ways I want.  While I don't particularly think YouTube access is a civil right, reframing that question by asking what if YouTube banned all blacks or all gays or all of any other group instead of conservatives seems to lead to a different conclusion.