This morning at 9:27 EDT, Buzz Aldrin crawled into the Lunar Module Eagle and began the lengthy process of powering things up for the short mission life of the module.  An hour later, Neil Armstrong joined Buzz in the LM.

A little over three hours after that, 1:47 PM, they released the latches and separated from the Command Module.  At 2:12, Michael Collins fired thrusters on the CM moving it two miles away from the LM.  Except for that small altitude difference, both vehicles remained in their initial orbit from yesterday's lunar orbit insertion until 3:08 PM when Armstrong fired the descent engine to lower the Eagle's orbit.

What follows in a 20 minute video depicting the landing which is easily the best modern reconstruction of the landing that I've seen.  It combines video from the window as Armstrong would have seen it with the audio traffic from Mission Control.  The first three minutes gives a modern simulation and animation of how it all worked; after that, it goes to the view recorded on the LM with spacecraft communication on the left speaker and mission control intercom on the right.  Yes, I think it's worth the time.

At 6:00 PM, Armstrong radios down to mission control that he recommends they start the EVA (Extra Vehicular Activity) sooner than planned; at 9 PM.  Although they don't make the 9PM goal, the 10:39 beginning of the EVA is still five hours earlier than the mission plans.

Like millions of people around the world, I hung by the front of the black and white TV; this one in my uncle's house in New York City.  We watched intently but I don't recall exactly how much we saw or if we watched until 1:11 tomorrow morning when the EVA officially concluded. 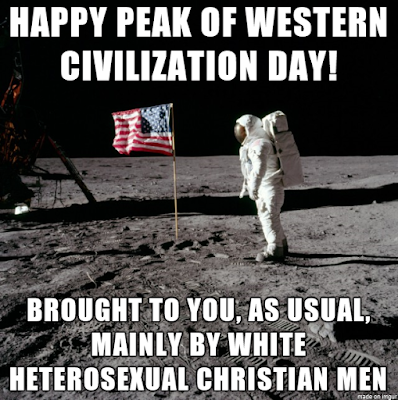 as condemned in the New York Times.
Posted by SiGraybeard at 12:27 PM