This past Tuesday, July 2nd, NASA's Orion spacecraft cleared another hurdle in preparations for its first manned flights to the ISS.  The Orion successfully tested the launch abort escape system in a test launched from Cape Canaveral.  This is the test that SpaceX failed in May, because the vehicle exploded on the launch pad about a half second before a test.  Other automated systems have done aborts within milliseconds before launch; cratering explosions that take out the launch stand don't count as test aborts.


It went fast. Early on Tuesday morning, a former Peacekeeper missile lofted a boilerplate Orion spacecraft to an altitude just shy of 10km (5.4 nautical miles) before a powerful escape motor fired. Amid the smoke, the escape system pulled the NASA spacecraft rapidly away from the Peacekeeper booster. The entire test lasted 3 minutes and 13 seconds.
...
In many ways, this was an odd-looking test. The stubby Peacekeeper missile looked nothing like a tall, brawny rocket—such as the Space Launch System or the Delta IV Heavy—capable of launching Orion into space. After the escape system fired and Orion was released, the vehicle tumbled and plummeted into the Atlantic Ocean in what was less than a heartwarming scene.

You read that right: they threw away the boilerplate Orion capsule.  According to Orion Program Manager Mark Kirasich, the intent of the flight was very specific:  at the time of maximum dynamic pressure during a launch, when a rocket is still accelerating but the atmosphere remains relatively thick, the launch abort must be capable of pulling the capsule away from its booster, reorienting the spacecraft, and then releasing it.  They simplified the test to its bare essentials and Orion passed. 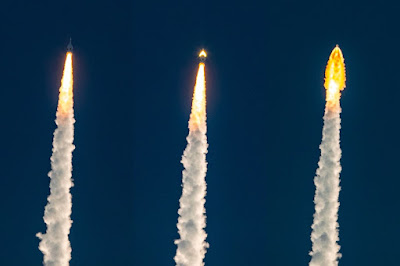 In this three photo montage, we see the Peacekeeper and Orion system on ascent, the moment the escape rocket tower ignites and finally as the escape tower is pulling the capsule away from the booster. 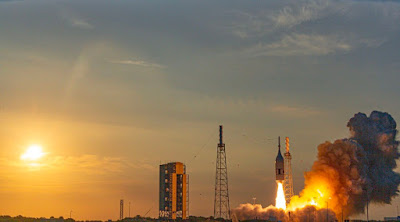 The test launcher and escape system are better seen in this photo from launch at 0700 on Tuesday (7/2/19).  More details viewable at Ars Technica.

It's not clear what the big picture view of this is.  Clearly, the successful test keeps Orion on track for an uncrewed mission on top of NASA's Space Launch System rocket in 2021. The bigger challenge will be getting the rocket ready for such a mission.  The possibility of manned launch is farther out than '21, and the program still has uncertainty surrounding it.


In truth, the problem with Orion has never really been its technical performance—by all accounts, NASA and Lockheed Martin are building a capable, robust, safe vehicle for humans to return to deep space in the early to mid-2020s. Rather, the issue is one of mass, budget, time, and mission. In terms of mass, Orion is a very heavy vehicle with its launch escape system, about 26 tons. This requires a very large rocket to launch it even into low-Earth orbit, let alone lunar orbit.

A bigger problem with Orion than its mass is its apparent lack of a clear cut mission. Since NASA first solicited contracts for a deep space capsule in 2005 and awarded the contract to Lockheed a year later, the space agency has spent $16 billion on Orion. At the time of the contract award, the intended purpose for Orion was carrying humans into deep space and back before 2022 or 2023.  There are no planned deep space missions before '22, but if Orion flies to the moon by 2025, the development process will have stretched into two decades.  Flying to the moon by '25 seems optimistic to me.

NASA has lacked a clear, sustained purpose to actually use Orion and that's due to the thoroughly dysfunctional congress. NASA has filled out the goals and intents of the Artemis program to return humans to the Moon by 2024, but so far Congress has yet to agree to the Trump administration's desire for funding.  The very last thing the House will do is anything that might make Trump look good.  And so Orion tests, and waits, and tests some more.

Meanwhile, if you're keeping score, the manned missions for the US (consider these very preliminary) are on NasaSpaceFlight - for rough planning purposes.


Boeing's uncrewed Orbital Flight Test of its Starliner vehicle will move to a launch planning date of September 17, 2019. SpaceX's Demonstration Mission-2 is now tentatively planned for November 15, 2019. The flight would see astronauts Bob Behnken and Doug Hurley perform a 7-day flight of the Dragon capsule. Then, Mike Finke, Nicole Mann, and Chris Ferguson would launch November 30, 2019, on the first crewed mission of the Starliner capsule. We'll be pleasantly surprised if any of the crewed missions occur in 2019.