The Fourth of July Barbecue is... Complicated

I wanted to do something different for the big day.  My adventures in Sous Vide barbecue (recent example) have gone well.  After several hours of reading, I decided on what to do.  I'm going to call it Double Smoke Sous Vee Cue.

A few weeks ago (and I see I didn't post about it) I did sous vide pulled pork.  The idea was to cook 24 hours at 170F, followed by three hours in the smoker.   Except it went horribly wrong and still came out excellently in spite of that.  At about the four hour mark, I went by the sous vide container in the kitchen and the water was discolored.  Somehow my vacuum sealed bag had leaked. When I went to take it out to rescue the butt, the bag fell apart, dumping the roast into the water. The tub was now full of weak soup that, frankly, didn’t have enough ingredients in it to make a good smelling soup.

After clean up, I re-seasoned the butt with the same mix as initially used, then vacuum sealed it again. This time, I double bagged it- the vacuum sealed bag inside a gallon Ziploc bag sealed by water displacement. Re-set the timer for another 20 hours, and the bags held this time.  After the overnight soak, it was back on plan.  Took it out of the sous vide cooker, chilled it in ice water for an hour, did a barbecue rub and then into the smoker for 3 hours.  Very good pulled pork. 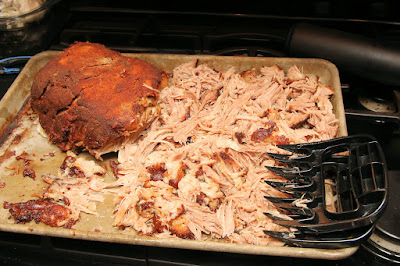 While reading on how to up my game, I came across the idea of smoking it first for a few hours, then putting it into the sous vide bag.  The idea is that you get a better bark and more smoke flavor.  I came across a guy who did some interesting experiments with a pair of beef briskets and he really got me intrigued.  Medium rare brisket - pink like medium rare steak but phenomenally tender?  You won't get it any other way.  (I know I have one or two readers who are interested in this subject - you owe it to yourself to read that link.  It's long, full of pictures, and lots of insights from a chef.)

Back to pork butts (which are really shoulders, but that's not important now), they're ordinarily cooked to a final internal temperature of close to 200 but during the cooking process, I've always experienced what's called "The Stall".  The internal temp reaches about 165 and will sit there for hours.  What's happening is that the collagen in the meat, what makes it tough, is breaking down and converting to gelatin.  How long this takes depends on the particular cut of meat and its history.  This leads to the attraction of cooking sous vide, because I can stick it at 165 so that the temperature is uniform from center to crust and leave it until I know it has broken down and gotten tenderized.

This led me to come up with the experiment.  This morning, I started with a completely raw pork butt, rubbed it with some spices, and then put it into the electric smoker with a thermometer probe on the rack in front of the meat.  I kept that thermometer reading 225 and smoked from 11:30 to 4:30.  The internal temperature was 145 when I stopped.  I brought it into the house and let it cool down to a temperature that was touchable because some handling was necessary.  I put it into a vacuum bag, sealed it, and then double bagged it in a one gallon Ziploc bag.  I had preheated a large pot of water to 165 to fill my sous vide cooking tank, and suffice it to say everything went more or less on time as planned.  The bath reached 165F at about 5:10 PM  It will cook for 18 hours, which will be over a little after 11:00 AM tomorrow.  Then it will be unbagged, cooled, dried and go back into the smoker probably by noon for another few hours. 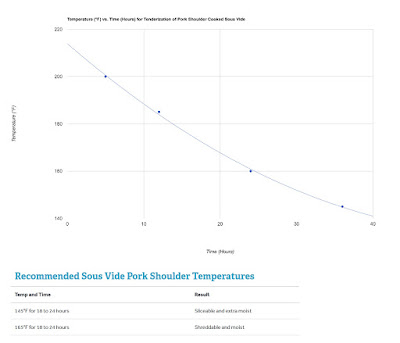 A little graphic I put together from two others at Serious Eats.

Summary and pictures after the holiday.