Tribute to Apollo Program in Houston

As part of the celebration of  the 50 year anniversary Apollo 11, the zenith of the agency's existence, NASA's historic Apollo Mission Operations Control Room 2 ("MOCR 2" - pronounced "mo'-ker") is set to reopen to the public next week.  Viewing (from the visitor's gallery, via tram tours departing from Space Center Houston) starts tomorrow, July 1, 2019.   If you're in the area, or don't consider it a big deal to go, it's probably worth your time.

Ars Technica has the story.


For the past two years, historians and engineers from the Kansas Cosmosphere's Spaceworks team have been lovingly restoring and detailing the 1,200-pound (544kg) historic sage green Ford-Philco consoles that populated the control room—repairing damage from decades of casual neglect and also adding in the correct control panels so that each console now correctly mirrors how it would have been configured for an Apollo flight.

Ars was invited to view the restored MOCR 2 last week as the final finishing restoration touches were still being applied. We conducted some interviews and shot some photos while technicians and construction workers bustled around us, hammering and screwing the last bits and bobs into place. The room's lighting system was in the process of being worked on, and the room flickered several times between fully illuminated daytime lighting and dim twilight—providing an even more accurate glimpse of what it might have looked like during an actual mission.

MOCR 2 was where controllers sat and ran every Apollo flight except for Apollo 7. "The Eagle has landed" and "Houston, we've had a problem" both happened in MOCR 2.  It's not quite that simple, though.  Apollo flights lasted from 1968 through the end of 1972, and the room changed over those years.  Naturally, NASA wanted it to be exactly like it was at its best and most capable.

Further, Apollos 15, 16, and 17 were "J" missions, which were the most complex of all the Apollo flights. Configuring the room Apollo 15-style meant having the most stuff on display and provided the best showcase of MOCR 2's capabilities and design.

The consoles are beautifully done, rigged up for the first time in decades with functioning lighting and screens. Tetley explained that rather than reconnecting the buttons' built-in lighting, technicians had painstakingly wired new LEDs inside each individual button so that their lighting could be managed by a central Crestron automation controller. The screens themselves are LCDs dressed with a new fascia, though the original tube displays have been saved and preserved elsewhere. While we were taking pictures, the screens mostly showed off the same handful of Apollo-era displays (which were all dead-on accurate, even down to the typeface). Tetley explained that during an actual tour, the console screens will run through preprogrammed sequences of static images and video.

In any sort of reenactment, the difference between great and "also ran" is the level of details.  Workers found scraps of original carpet and wallpaper that weren't faded or degraded over time, but that aren't available today.  The carpet was recreated by a different company.  The supplier of the wallpaper was bought up by another company in the intervening years.  "But they went to that company," she continued, "and they found the roller in their warehouse." With a bit of retooling, the company was able to churn out a custom order of new vintage wallpaper for the room. "This is an exact copy of the wallpaper that we have."

But that isn't the most extreme portion of the work.


Perhaps the most bonkers bit of restoration has to do with the ashtrays that decorate the consoles, exactly as they did in the '60s. They were empty when we did our photo shoot, but the restoration team has plans for those, as well. "We're going to have cigarettes, cigarette butts," she said, laughing. "All the cigarette butts that were found when they cleaned the consoles and when they cleaned under the floor, we saved all those. I have people smoking cigars and they have to lay them out so they don't stink. So those'll be put back in."

That commitment to authenticity extended even to the dressings applied to the consoles, which are each festooned with three-ring binders (empty when we took our pictures but set to be stuffed full of correct and accurate mission logs and procedures before the room reopens), ashtrays, mugs, thermoses, empty cigarette cartons, and soda cans. Tetley and team even located the correct brands of tobacco products for each of the controllers—Ars reached out in email to former EECOM controller Sy Liebergot about the can of tobacco on the EECOM console and whether it belonged to him or his counterpart John Aaron, and we got a fast response: "The can of Mac Baren's burley is pipe tobacco," he replied. "So it was probably mine since John smoked cigarettes."

People who don't follow the space program are probably not aware that the Johnson Space Flight Center in Houston is strictly the result of Lyndon Johnson's work in the Senate; truly an act of "bringing home the bacon" to his constituency in Texas.  Originally, flight control was from Cape Canaveral (before the assassination of JFK).  When the new Flight Center in Houston was constructed, control was on the Cape until liftoff, when authority transferred to Houston.  As a result, there are virtually identical consoles and other electronics at the Kennedy Space Center, inside the Vehicle Assembly Building.

I think the restored MOCR 2 exhibit would be an interesting thing to see.  Houston is pretty much a two day drive from here - the mapping programs tell me it's 18-1/2 hours with good traffic.  A bit far for me to drop in.  As I said in the lead in, if you're in Texas, or it's within your easy, "let's go see it" distance, it seems like it would be worth seeing. 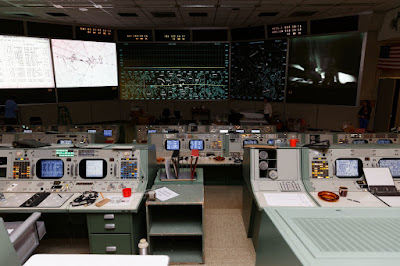 (Standing at the top row of the MOCR looking forward. The consoles are all lit via internal LEDs powered by a Crestron commercial lighting system, and the positions are all dressed to appear as if the controllers had all gotten up mid-shift and walked out and left all their stuff behind. )