I noticed this story on the ARS Technica Rocket Report last week and waited for this week to see if the scheduled launch took place.  With a diversion to the Tesla and SpaceX fan website, Teslarati.


As early as June 12, SpaceX will attempt to launch a trio of Canadian satellites worth $1 billion from Vandenberg Air Force Base. Built by Maxar for the Canadian Space Agency, the Radarsat Constellation Mission comprises three remote-sensing spacecraft designed with large surface-scanning radars as their primary payload

The launch took place on the 12th, with a beautiful remote view of the rocket breaking through the morning fog (video here). 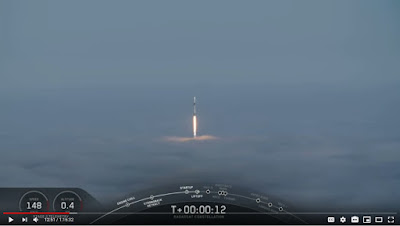 The video is over an hour long, but if you watch until the booster lands back on Vandenberg AFB, that's near the 20:30 minute mark, with liftoff at almost 12:38.

The launch and booster recovery are not the reason for this post.  The $1 Billion dollar mission is from an agency that has an annual budget of about $250 Million.  That's right, four years worth of the agency's entire budget for this mission, which boggles my mind.  It's not surprising that they spent a bit of time haggling with SpaceX to find a "lightly used" booster and get the lowest price they could with what they thought to be their highest chances of success.  This is the part Teslarati adds:


From an external perspective, forgoing a twice or thrice-flown Falcon 9 Block 5 booster after nearly a dozen successful demonstrations does not exactly appear to be a rational decision. However, whether it was motivated by conservatism, risk-aversion, or something else, Maxar and CSA likely have every contractual right to demand certain conditions, as long as they accept the consequences of those requirements. In the case of RCM, the customers accepted what they likely knew would be months of guaranteed delays to minimize something they perceived as a risk.

To some extent, it’s hard to blame them. After going more than $400M over budget, the Maxar-built trio of upgraded Radarsat satellites are expected to end up costing more than $1 billion. CSA’s annual budget typically stands around $250M, meaning that this single launch is equivalent to four years of space agency’s entire budget. A failed launch would be a huge setback. Additionally, RCM will likely become the most valuable payload ever launched by SpaceX, beating out the Air Force’s ~$600M GPS III SV01 spacecraft by a huge margin. For RCM, mission assurance is definitively second to none.

A few hours after the launch, prime contractor Maxar said the satellites were "performing according to plan.", so it sounds like the mission is a success.

Again, congrats to the Canadian Space Agency, Maxar and SpaceX.