Is Obama Stupid Or Malicious - Plus, Why I've Dumped Waze

According to this morning's daily email from the Blaze, ex-President Obama was in Brazil recently and spread a bunch of absolute lies about American gun laws.


The moment was captured and put on YouTube, where it has since been removed by the user. But not before it was shared on Twitter and Facebook.

"Some of you may be aware, our gun laws in the United States don't make much sense," said Obama. "Anybody can buy any weapon any time, without--" he had to pause as the foreign audience applauded him criticizing the United States. He then continued saying "You know, without much, if any regulation, they can buy it over the Internet, they can buy machine guns."

At the risk of being too pedantic, and at the cost of repeating myself yet again, when anyone questions whether another person is stupid or malicious that's not an exclusive OR choice.  They can be, and often are, both stupid AND malicious.

I feel pretty confident that my readership doesn't need the facts explained here, so I won't.  For the rest of you, nothing after the words "don't make much sense" is true.  Not even slightly true.  To borrow a quote from author Caleb Howe:


But Obama obviously wasn't going for facts. He was just indulging one of American liberalism's favorite pastimes: criticizing America to an audience abroad.

In fact, that was kind of his specialty, back in the day.

My absence of a post yesterday was not at all planned, but ran afoul of too much day with not enough free time.

Yesterday was a memorial service for a friend's mother, about an hour's drive away in the center of the state.  We've been to this place once before but a year ago, so while I remembered much of the area and how to get there, knowing exactly where to turn was fuzzy.  During our 2017 eclipse trip, we auditioned the GPS driving app Waze, and while we weren't delighted with it ("I'll give it a 3 out of 5") it still promises the helpfulness of users reporting accidents, delays, and other problems.  I've had it off and on my phone since then but thought I'd use it.

It's hard to estimate how big an audience an app like Waze has, but these folks imply it's one of the more popular GPS-driven apps with over 30 Million users in the US.  During the eclipse trip we compared it to the native maps app on the phone, and there didn't appear to be much difference.  Except for the unnecessary side trip Waze imposed on us that day.

The place we were going to was on a street called Lakeview Drive.  This is like Main Street in being the kind of name that there could be one in almost every town, maybe more than one, so we were careful entering the full address, down to the zip code.   As we neared the end of the drive, Waze directed us off the main road we knew to be on.  It wasn't completely clear why, but we followed its driving directions.  There was construction going on and we didn't know if was routing us around that.  It wasn't long before we found we were not just at a wrong address, we were in the wrong city, about 10 miles away from our friend's home.

Here's the kicker: on the Waze app and on the native Maps app on the iPhone, it said we were on  Lakeview Drive.  On the the street sign in front of us it said Lakeside Boulevard.

There's the occasional story in the news with the theme that someone following their GPS drove into a lake or did something stupid like that.  This is how it happens.  When we were on that street, the signs clearly said Lakeshore Blvd and as you know there's no way to convince Waze (or Maps) that it's wrong.  It was telling us to drive into a park near a pavilion, which we knew was wrong, but it took a lot of puzzling to figure out how to get where we needed to be.

We ended up being over an hour late to the memorial service and being later getting home than expected.

Like many people, we have a few options for a GPS.  Most people have switched from a standalone unit (Garmin is still the big name) to an app on their phone.  I have an '09 Ford Exploder with the first gen Microsoft Sync; that has GPS maps in it (that cost about as much to upgrade as to buy an entire Garmin GPS).  We have choices.  For now, I've deleted the Waze app again and I think I'm going back to my standalone Garmin GPS. 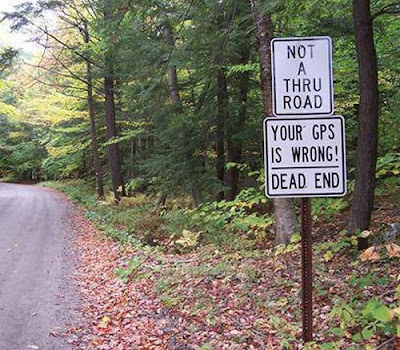 Thankfully, we didn't come across anything like this sign.  Posted here; somewhere in the history I think it said this was in New Hampshire.