A Rather Unusual Saturday

We did a first for us and went to a weekend concert in the biggest auditorium in the area, the King Center for Performing Arts.

But you don't care about where we went; you want to know whom we went to see, right?  The "first for us" is we went to see Weird Al Yankovic on his Strings Attached Tour that started a few days ago.  Al was in town a few years ago and we didn't go; ever since then Mrs. Graybeard has talked about not missing him if he comes back.  Last January when she saw he was coming it was a natural to grab tickets before they sold out.  And it was sold out.


I feel a disturbance in the force... as if hundreds of people are closing their browser tabs.

The reason for the name is that the concerts use (what they called) a 39 piece symphony orchestra.  Rather than bring a symphony on the road with them - with all the complications that entails for travel, accommodations and so on - they use a local orchestra.  I assume the musicians get the music and program they'll be playing long in advance.

Confessing that I would actually pay money to see Weird Al probably lowers some of your opinions of me (and for many, nothing could make your opinions of me lower), but I've had a soft spot for music parodies since Alan Sherman in 1963.  I appreciate clever language, puns and lyrics that lead to vivid visualizations, but it simply has to fit the meter of the song!

The reason for the tour is a new album so the tour itself is a bunch of old favorites and new music (Mental Floss says this is Al's biggest selling record ever).  They didn't play all my favorites - Al has been doing this for over 30 years, there isn't enough time to play everything - but they played a lot of good stuff and it was a very enjoyable show.  It's entertainment, after all, and Al tries to be entertaining.  In addition to the symphony, there's just an eight person act band, one guitar, one bass, one keyboardist a drummer and three women doing backup singing.  They mix in a bit of multimedia by way of a large slide show or video in the background.

The show starts with the symphony playing favorite songs, like the themes from various movies (Indiana Jones, Superman, and a few more) - then everyone took off for 20 minutes.  The orchestra plays backup throughout the evening.  Al uses a lot of energy in the show, and is performing for about 90 minutes including an encore of one of his big songs, The Saga Begins.  He does several costume changes, and there are moments where Al basically goes into the first few rows and plays with the audience.  This is "optional at extra cost" - the VIP package that includes meeting Al and the band after the show, pictures, and a few mementos. 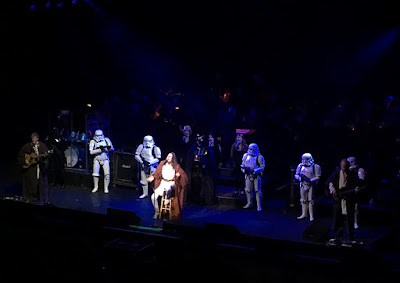 The craptastic iPhone picture of Al during The Saga Begins is a reminder of the only thing about the evening that really torqued me off.  On the King Center's web page, they say that interchangeable lens cameras aren't allowed, or a camera with a lens bigger than 6", so I brought my point and shoot camera, which isn't going to challenge the image quality of a long lens on a good camera, but is going to be sharper than the cellphone.  The event security guys wouldn't let me in with it.  I quoted chapter and verse of that page, and took it up the chain of command as far as I could, but (of course) they were not going to allow me to challenge their authoritah.