Although my main project in the shop is the Webster engine, I still can and do use the shop for other little things.  I had one of those this week.

Last year I mentioned a friend I have who makes wooden signs for entertainment and a little supplemental income.  He had brought me an idea for an improvement to his setups, making a version of his plastic templates out of aluminum that can be dropped onto a wood blank and help him fixture it much faster.  A few weeks ago, he came to me with another idea.  It concerns the metal bushings that sign routing kits use (example product and photo). 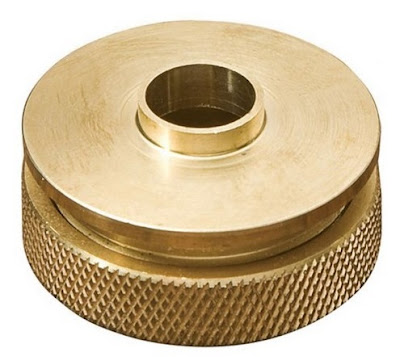 It's important to point out that this view of the bushing is upside down.  That circular, brass disk with a protruding collar is down in contact with the template while he's cutting.  That disk is also in plane with the base of the router so that it slides smoothly, without tipping catching, or getting stuck on an edge.

He had noticed that sometimes it seemed the raised collar (which is sized to be just a few thousandths larger than the outside diameter of the router's cutter) wasn't allowing him to move the router properly because wood chips would get stuck between the bushing and the template.  He reasoned that even though he had a vacuum attached to the router, the brass covered the chips and there was no way for the vacuum to get at them.

So he asked me if it would be possible to perhaps mill out sectors of the bushing leaving enough metal so that it was still a working bushing.  I thought about this for a while and said I could do a few different diameters but not everything he had - the end mills to cut out a partial groove might not be available in every size that we'd need.  I countered that there'd almost certainly be any size drill bit one would ever need and that I could drill an array of holes - kind of like the lug nut holes in a tire rim.

We pondered and I went home with a damaged sample to draw it up in CAD and play with clearances for given drill bit sizes.

This week, I drilled the holes in the sample piece and then brought it back over for him to try.  This was designed by determining the radius of the circle of holes (in CAD), chucking the bushing in the rotary table, and drilling a hole every 45 degrees at that radius.  The bushing surface is now mostly open space. 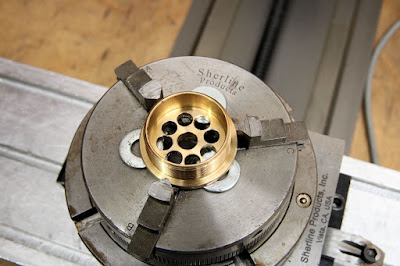 Playing in CAD told me that for this size bushing, for 1/4" diameter router bit, the largest drill bit I'd feel comfortable using was 7/32" - 0.219".  I haven't tried to see how much room there is for other sizes, and it might be that three arcs cut out with an end mill while spinning the rotary table.  If I had another of these, I might try to do that with a 3/16" (0.188") end mill (I think I have one...) cutting three arcs.

Actually, it could be interesting to try to make some of these bushings on my CNC lathe.  I have no brass, but I have aluminum and cold rolled steel in a size that could make some.  Hmmm...