Everything's Free In The Clown Show

Author Gary Doan at the Libertarian Republic watched the Democratic Clown Posse debates so that you don't have to.  Why?  To keep a running tally of all the things they're promising to give away.


The Democratic primary has become an election for High School President, where everyone is promising vending machines in the cafeteria and larger towels in the locker-rooms. There are so many proposed “free” programs that it may be difficult to keep track without someone compiling them.

And this was just for the first night - Wednesday!  One or more of them promised all of the following as free stuff.

This reminds me of the time I agreed with Obama.  I'll never forget that day.  It was back in 2009, in an interview with Steve Scully on CSPAN, Scully said, "at what point do we run out of money?" and Obama said, "well, we're out of money now".  It was remarkably honest for any politician.  The exact exchange (for those anal-retentive about misquotes) was:


SCULLY: You know the numbers, $1.7 trillion debt, a national deficit of $11 trillion. At what point do we run out of money?

OBAMA: Well, we are out of money now. We are operating in deep deficits, not caused by any decisions we’ve made on health care so far. This is a consequence of the crisis that we’ve seen and in fact our failure to make some good decisions on health care over the last several decades.

Note that Scully used the wrong words: $1.7 trillion was the annual deficit and $11 trillion the national debt. The situation is far worse now than it was then.  The annual deficit is probably going to be over $1 trillion again, which is better than '09's $1.7T, but the total debt is double what it was back then, $22.4 trillion. (Doubled in just 10 years...)

In a nation with that kind of debt, where does the money come from for all this stuff?  You know it means higher taxes and fees for everything because as RA Heinlein put it, "TANSTAAFL": There Ain't No Such Thing As A Free Lunch, or in this case a free college, free health care, free housing, free Universal Basic Income. Contrary to what the Modern Monetary Theory folks say, we can't just create whatever money we want out of thin air and spend it indefinitely.

The clown show is just starting.  There are more debates and more pandering to the extreme ends of the socialist spectrum for over another year. 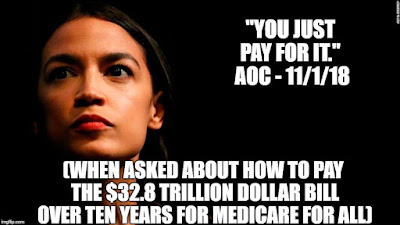 Pure MMT.  Make up money out of nothing and pay for it.  Which is a good way to end up with money worth less than toilet paper, like Venezuela today.