We learn from Electronic Design magazine this week that a German company called Imec has recently announced they doubled the energy density of their solid state batteries.  Solid state batteries, as the name implies, aren't filled with a liquid (or gel) electrolyte.  They hold the promise of overcoming some of the drawbacks of the very common Lithium Ion batteries.

The major benefits of solid-state battery technology comes from the use of solid electrodes and a solid electrolyte instead of the liquid or polymer electrolytes found in lithium-ion or lithium-polymer batteries.

At the recently concluded European Electric Vehicle Batteries Summit (June 17-19, Berlin) Imec announced a solid-state Li-metal battery cell with an energy density of 400 Wh/liter at a charging speed of 0.5C (two hours), claimed to be a record combination for a solid-state battery. By way of review, charge and discharge rates of a battery are governed by C-rates. The capacity of a battery is commonly rated at 1C, meaning that a fully charged battery rated at 1 Ah should provide 1 A for one hour.

While I appreciate the detail of 400 Watt*Hours/liter, it's not a unit I'm familiar with.  Wikipedia tells me existing Lithium Ion (wet chemistry) batteries have a volumetric energy density in the range of  250 to 620 W·hours/l.  Until now, I've only used numbers for specific energy density in Watt*Hours/kilogram.  They tell me that typical numbers are 100 to 250 W·h/kg, but we've seen numbers of over 400 W*h/kg in these pages.  (note: since it's not likely to be seen as political, this is the sort of fact that Wikipedia can be trusted on)

Imec reports that it continues to follow its roadmap to reach densities over 1000 W*h/l at a charging speed of 2-3C (less than half an hour) by 2024.  1000 W*h/l is quite a bit (61%) better than the numbers Wikipedia offered for current Li-ion batteries.


While battery makers desperately try to figure out how to reach a specific energy of 450 Wh/kg (Watt-hours per kilogram), gasoline already offers 12,000 Wh/kg. 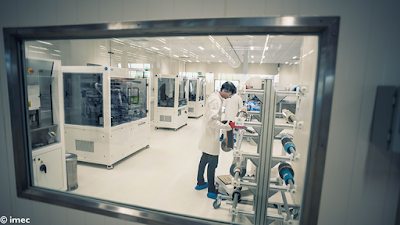 Imec built this solid state battery prototyping lab at the EnergyVille Campus (EnergyVille is a collaboration between the Flemish research partners KU Leuven, VITO, Imec and the University of Hasselt in the field of sustainable energy) and was set up in Genk, Belgium jointly with the University of Hasselt. The pilot line allows manufacturing of small prototype cells of up to 5-Ah capacity.


The facility includes a 300-m2 (3230 ft2) battery-assembly pilot line with a dry room of 100 m2 (1080 ft2) (the manufacture of lithium-ion batteries requires some processing steps to be carried out in a dry room, where the moisture content remains below 100 parts per million; the design and operation of such a dry room adds to the battery’s cost).