I've completed the next part on the Webster engine I've started building.  The first part was almost two weeks ago, May 30.  That's a long time to make a plate with seven holes in it, but there have been some extenuating circumstances.  The Game of the Other Thrones kept me out of the shop a couple of days itself. 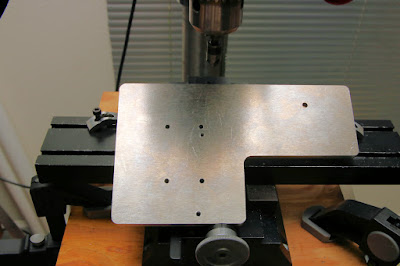 The part fought me in some ways, too.  There's an obvious rectangle of four holes on the left, with a pair of smaller holes mixed in with them.  The smaller ones get tapped 6-32 and one of them fought me bitterly.  It's a long story centered on breaking the tap.  The Click Of Doom happened when I started to back the tap out, which I guess means the chip had clogged the tap.  I was tapping on the mill's table, where the holes were drilled, and had a 1/8 dowel pin in the drill chuck on the mill which went into the gap on the top of the wrench holding the tap.  I'd advance the tap 1/2 turn then lower the pin to keep the tap very close to perfectly vertical, and I must have not backed the tap out often enough.  I'm fairly sure I had not backed it completely out yet and this was going to be the first.

Well, that's probably TMI, but I need to tap a lot of 6-32 blind holes in this thing and I'm pretty sure the only taps I've ever broken were 6-32.   I've also read it's the hardest common thread for tapping; something about the ratio of the depth of the thread to root diameter.  I need to buy some more 6-32 taps - I only have one left.  Maybe a gross will get me through. 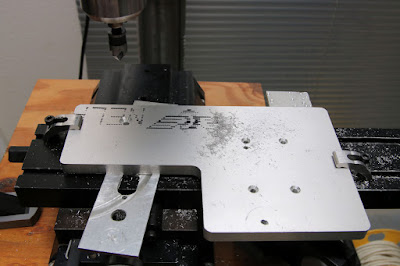 The rectangular pattern holes and the big one in the upper left in this view get a countersink that required I buy a new set of 82 degree countersinks; everything I own is 90 degree.  It's not an optical delusion that the bottom looks like a better finish.  I should have noticed that and machined it with that side up.  I'll see if some finish work can pretty it up.

The next parts are modeled and ready to machine.  These are two side plates made from 5/16" thick aluminum. 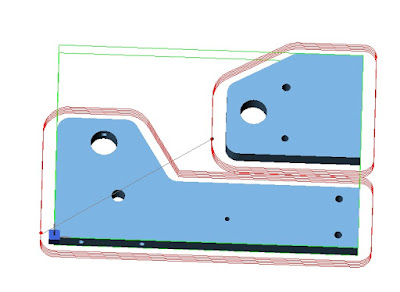 The faint green outline represents the sheet they'll be cut from, the two parts are in blue and the red lines are the tool paths for cutting out the two parts from one small plate.

I have another piece of metal ready to work on, the cylinder, which is cold rolled steel.  I've done a little work on that, but barely scratched the surface (if you'll pardon the pun).  Not quite sure which part gets the attention to get completed first.  There are arguments in favor of both.