The Destruction of the West - California in the Lead

Thanks to lead-in from 90 Mile From Tyranny, we find an epic piece written by Victor Davis Hanson in National Review, "California: America's First Third World State".

California, as the biggest liberal enclave in the US, stands out from the rest of the states in the way that it seems to strive to attain the ideal social structure that so-called progressives long for:  a medieval society of royalty and peasants (as long as they're the ones on top).  In modern terms that means no middle class, just a wealthy, nobility class and a much larger lower (or under) class of indentured servants who keep them in power.

VDH opens with this trenchant observation:

Another chief characteristic of a Third World society is the official denial of all of the above, and a vindictive, almost hysterical state response to anyone who points out those obvious tragedies. Another is massive out-migration. Residents prefer almost any country other than their own. Think Somalia, Venezuela, Cuba, Libya, or Guatemala.

It's really worth reading the whole thing, but VDH puts together a strong case to back his points.  I'll excerpt a few here.


By many criteria, 21st-century California is both the poorest and the richest state in the union. Almost a quarter of the population lives below the poverty line. Another fifth is categorized as near the poverty level — facts not true during the latter 20th century. A third of the nation’s welfare recipients now live in California. The state has the highest homeless population in the nation (135,000). About 22 percent of the nation’s total homeless population reside in the state — whose economy is the largest in the U.S., fueling the greatest numbers of American billionaires and high-income zip codes.

But by some indicators, the California middle class is shrinking — because of massive regulation, high taxation, green zoning, and accompanying high housing prices. Out-migration from the state remains largely a phenomenon of the middle and upper-middle classes. Millions have left California in the past 30 years, replaced by indigent and often illegal immigrants, often along with the young, affluent, and single.
...
California’s transportation system, to be honest, remains in near ruins. Despite the highest gas taxes in the nation, none of its major trans-state freeways — not the 99, not I-5, not the 101 — after 70 years off use, are yet completed with six lanes, resulting in dangerous bottlenecks and wrecks. Driving the 99 south of Visalia, or the 101 near Paso Robles, or the 5 north of Coalinga is right out of Road Warrior — but not as dangerous as the fossilized two-line feeder lines such as 152 into Gilroy, or the 41 west of Kettleman City. The unspoken transportation credo of Jerry Brown’s aggregate 16 years as governor apparently was “If you don’t build it, maybe they won’t need it.”
...
In 1973, when I first visited and lived in Greece, the roads were medieval. The old Hellinikon Airport was dysfunctional, if not creepy. Highway rest stops were filthy. I have lived in or visited Greece in the ensuing 45 years since, including occasionally after the 2008 meltdown and European Union standoff. And yet today, the freeways, chief airport, and rest stops of relatively poor Greece are in far better shape than are California’s. LAX’s poor road access, traffic, uncleanness, crowds, and chaos seem premodern compared with the current Athenian airport.
...
Power outrages are characteristic of Third World countries. Here in California we are advised to brace for lots of them, given that our antiquated grid apparently contributes to brush fires on hot days. As a native, I do not remember a single instance of our 20th-century state utilities shutting down service in the manner that they now routinely promise.
...
California’s cycles of wet boom years and dry bust years continue because the state refuses to build three or four additional large reservoirs that have been planned for more than a half-century, and that would store enough water to keep California functional through even the worst drought. The rationale is either that it is more sophisticated to allow millions of acre-feet of melted snow to run into the sea, or it is better to have a high-speed-rail line from Merced to Bakersfield than an additional 10 million acre-feet of water storage, or droughts ensure more state control through rationing and green social-policy remedies.
...
California schools are usually in the bottom decile of national rankings. No one in polite conversation asks why that is so, given that the state’s K–12 schools used to be among the most competitive in the United States.

Yet, again in medieval fashion, the professional schools and science and technology departments of California’s premier research universities — Cal Tech, Stanford, UC Berkeley, UCLA, USC — are among the highest-rated in the world. Imagine something like the scribal oases of Padua, Oxford, or Paris in an otherwise frightening 13th century. If one wishes to be schooled as an electrical engineer or cancer researcher, California is an attractive place; if one wishes to be a knowledgeable graduate of a public elementary and high school, it most certainly is not.
...
California now has the nation’s highest basket of sales, gas, and income taxes. With a state surplus, and a slowing economy, one would think that the legislature and governor would pause before even considering raising more taxes. After all, new federal tax law limits write-offs of state and local taxes to $10,000 — radically spiking upper-bracket Californians’ federal tax liabilities.

Yet the rule in California is to punish the upper middle class while pandering to the rich and romanticizing the poor. Thus, the legislature is now considering a punitive new inheritance tax, and it just imposed an Internet sales tax.
...
What caused this lunacy?

A polarity of importing massive poverty from south of the border while pandering to those who control unprecedented wealth in Silicon Valley, Hollywood, the tourism industry, and the marquee universities. Massive green regulations and boutique zoning, soaring taxes, increasing crime, identity politics and tribalism, and radical one-party progressive government were force multipliers. It is common to blame California Republicans for their own demise. They have much to account for, but in some sense, the state simply deported conservative voters and imported their left-wing replacements.

In many issues and at many times, California has started changes that filtered into the rest of the country.  Many of the movements that are pushing California into third world status are elsewhere in the country.  Seattle.  Chicago.  Portland.  New York City.  Jersey City.  New Orleans.  And others.  These things VDH describes should be flashing warning signs, saying "don't do what they did", yet too many seem to want to go down the path into the third world. 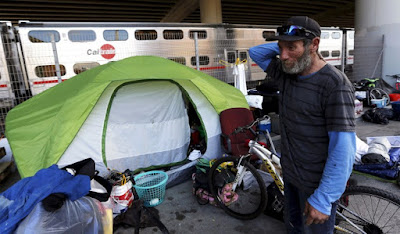