Early Tuesday morning was the first night launch of the SpaceX Falcon Heavy.  When we first heard about the launch it was to be Monday night at 11:30 PM EDT, and night launches are always worth watching (when the weather allows).  Sometime around 11:00 or so, they reset the time to later in the launch window, 2:30 AM EDT, so we set an alarm and went to bed.

The mission was complex, with the Falcon Heavy deploying two dozen satellites in a variety of orbits.


Today's launch kicked off a particularly complicated flight, as the satellites onboard needed to be injected into three distinct orbits. All told, the maneuvers required that the rocket's second-stage booster fire four times, with the final deployment scheduled to occur about 3.5 hours after launch. The complicated delivery pattern also dictated the night-launch window, Air Force officials confirmed before the liftoff.

The launch was spectacular, and for the first time, we could watch the return to launch site burns of the two side rockets.  Quite visible in the dark.  The stages returned to SpaceX's twin landing pads on Cape Canaveral, and while trees kept us from seeing the final burns, the sonic booms of the twin boosters going subsonic rattled the house assertively.  A minute or so later, the attempt to recover the core booster on their drone ship OCISLY (Of Course I Still Love You) failed.


The core booster's miss was no big surprise. SpaceX representatives had repeatedly stressed that its touchdown would be the most difficult of the dozens that Falcon 9 and Falcon Heavy first stages have attempted over the past few years, because today's mission required higher-than-normal speeds. Indeed, Of Course I Still Love You was stationed twice as far from shore this morning as it normally is during sea-landing attempts.

About that "twice as far from shore" as normal - the number I've heard somewhere was that it was 775 miles offshore.  This video shows the three booster recoveries.

The new accomplishment in this mission was that SpaceX's unusual way of trying to recover the payload fairings was partially successful.  Their approach is a chase boat with a net on it to catch the falling hardware.  They successfully recovered one of the two halves of the fairing.

This was a first for the speedy boat, which had come close on multiple occasions but had never managed to seal the deal. 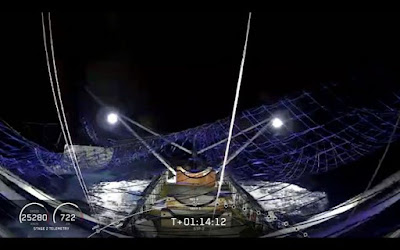 In the net on the left, just below the light, is a light colored chunk with a square edge.  That's the half fairing.  This is an worthwhile thing to do if the company is really trying to scavenge costs out of the process of launching hardware into space.


Payload fairings protect satellites during launch and are jettisoned after rockets reach space. The fairings SpaceX uses for the Heavy and the company's workhorse Falcon 9 rocket, which fall back to Earth in two pieces, cost about $6 million each, company founder and CEO Elon Musk has said.

There's thus ample motivation to recover and reuse this expensive hardware. Indeed, SpaceX equips both fairing halves with parachutes and small steering thrusters, to bring the gear down softly and under control.

It has been said many times that rocket launching is a tough business.  The safety margins on the hardware are small and the environment is unforgiving.  You have to get used to disappointment.  I'm sure the SpaceX engineers would have rather recovered all three boosters (the two side boosters were used on the Heavy's first mission, so this was their second flight).  I'm sure they would have rather recovered both sides of the fairing.  What the engineers will do is what we always do: study the failures to find what went wrong and what can be done to increase the chance of success next time, without raising prices too much.