Buried in the news flood from last week was an intriguing story about the real scientific research being carried out on warp drive.  Warp drive, the ability to exceed the speed of light in travel by bending the fabric of space time around a space ship, is a staple of science fiction.   Interstellar travel is made difficult by a simple fact.  As Douglas Adams so aptly described it:


"Space is big. You just won't believe how vastly, hugely, mind- bogglingly big it is. I mean, you may think it's a long way down the road to the chemist's, but that's just peanuts to space."

Distances to astronomical bodies outside the solar system are usually given in light years, the distance light travels at 186,000 miles per second.   There are 5.879 Trillion miles (soon to be called 5.879 Bernanke miles) in a light year and the nearest stars are just over 4 light years away.  A trip without warp drive requires much more than four years because acceleration to light speed has to be slow enough to not kill the crew.  Acceleration has to be limited to one G or so.  When you warp space/time the ship is unaffected, and to the people on board it feels as if nothing is going on.  If you went the speeds we can currently go, it would take generations to travel to the nearest stars. 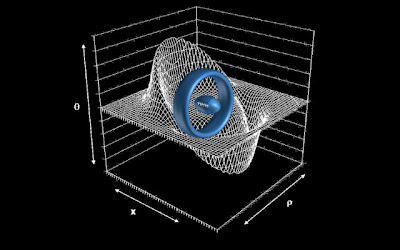 The idea of bending space time became an area of real scientific research some time ago, and a concept for a real-life warp drive was suggested in 1994 by Mexican physicist Miguel Alcubierre.  His system had a substantial problem, though: it required the energy you'd get by turning a planet the size of Jupiter into energy.   Since Jupiter-sized planets aren't convenient to carry around for fuel, and aren't just floating around everywhere, that's a bit of a problem.

Years ago, someone told me that once something has been shown to be theoretically possible by they physicists, the rest was just an engineering problem, "implementation details".  Last week, Harold “Sonny” White of NASA’s Johnson Space Center announced that by reconsidering the geometry of the ring around the football-shaped spacecraft (shown here, poetically, with football laces) they can bring the energy down to much more achievable levels.


But recently White calculated what would happen if the shape of the ring encircling the spacecraft was adjusted into more of a rounded donut, as opposed to a flat ring. He found in that case, the warp drive could be powered by a mass about the size of a spacecraft like the Voyager 1 probe NASA launched in 1977.

Furthermore, if the intensity of the space warps can be oscillated over time, the energy required is reduced even more, White found.

According to the Wiki entry, Voyager 1 weighed 1592 pounds which is like 1 godzillionth of the weight of Jupiter.   Suddenly warp drive got much more possible.  So possible, in fact, that they have started experiments in the laboratory to see if they can make a micro version time/space warp.


They set up what they call the White-Juday Warp Field Interferometer at the Johnson Space Center, essentially creating a laser interferometer that instigates micro versions of space-time warps.

“We’re trying to see if we can generate a very tiny instance of this in a tabletop experiment, to try to perturb space-time by one part in 10 million,” White said.

According to Star Trek canon, the first human powered warp drive flight was/will be conducted in  2063 by Zefram Cochran.  According to the film "First Contact", Cochran was born in 2013.

2063?  You know, it just might work out to be pretty close to 2063. The movie also implies that warp drive would have been invented sooner if not for the effects of World War III.