As California Sinks Farther Into Collapse

Six, over at The Warrior Class tells the story of dealing with the California bureaucracy.  You should read the whole thing. As usual, I'll tease the story a little.  He begins by telling the story that he had planned to go help a friend replace the shingles on his roof.  The state, however, has deemed that illegal:


Why? Because the ever so caring and concerned (Democrat controlled) state of California has decreed that if one replaces their own roof on their very own house they cannot be helped by anyone who isn't a blood relative who lives under that same roof.

After you ponder the wonder of that statement - that friends aren't legally prevented from helping friends - check this out:


When Car Guy went and got his permit, that he paid the very same fee as roofing companies do but that's for another post, he was informed that the city would forward his application information to the state and that said state inspectors were actively checking roofing sites to ensure compliance with their draconian rules and regulations and had in fact already issued 'several' citations. The fine? I am so glad you asked. $100,000.00.

One Hundred Thousand Dollars. Contemplate that for a moment my friends. ONE. HUNDRED. THOUSAND. DOLLARS. Minimum. Which means it most certainly will be more if the state can see any way to squeeze you for more. For having a friend help you roof your house.

As always when dealing with government, it gets worse.  You should read the piece.

I've quoted Victor Davis Hanson before on the mess that California has become.  California is in collapse, a zombie state that can't provide the minimal amount of reasonable governance, but instead of trying to create a friendly business climate, argues over outlawing circumcision and Pate de Foie Gras.   I've heard that 1000 Californians move out of the state every day, with 200 of them moving into Texas every day.  This is yet another example of why. 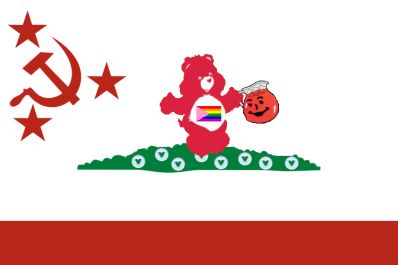 Flag of the People's Republic of California.

Labels: big freakin' out of control government, commies and other idiots, economics