A Trillion Here, A Trillion There, Pretty Soon ...

A trillion here and a trillion there, and pretty soon you're talking real money.  They may say that in Zimbabwe, but over here a trillion is real money every time.

H/T to Peter, Bayou Renaissance Man for pointing out that we have surpassed $16,000,000,000,000 in debt, as demonstrated by Zerohedge and other places.


Today, August 28, 2012, is when we can unofficially celebrate again, because 286 days after the last major milestone was surpassed with disturbing ease, total US debt following today's $35 billion auction of 2 Year bonds is, well, in a word: $16,OOO,OOO,OOO,OOOBAMA!
....
The result: $16.05 trillion, which is what the debt to the penny will officially show next week.

The last trillion dollars started on November 16, 2011, just a few days before we hit a debt to GDP ratio of 100%. 286 days to add a trillion is faster than the trillion before, which was faster than the one before that: that's characteristic of the nearly exponential growth the debt shows.  That previous link about hitting 100% shows a sort-of recent graph of debt vs. time, so I won't repeat that here. 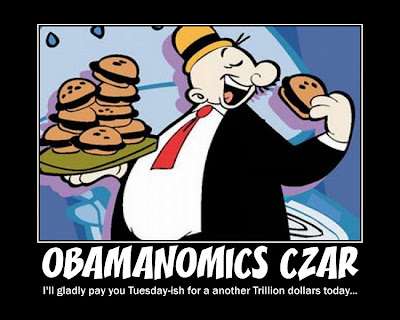 And you know what?  The $16 trillion isn't really the big problem.  Oh, sure, it will lead to economic collapse, but probably not very soon.  The debt to GDP ratio of 104.4% is bad, but it won't be fatal, yet.  Japan has a ratio over 200%!  Aside from Japan, Greece has 165%, Italy 120%, Ireland and Portugal each have 108% - all have a higher ratio than the US.  Notice that except for Japan, they're all in the PIIGS that are considered the worst risks in EU (Spain, by the way, is at 68.5% debt to GDP!) .   No, the problem is the entire picture, including the "off the books" accounts of medicare and social security.  Peter quotes Gary North in a review of the movie 2016:


... the on-budget debt of $15 trillion, which is chump change, while never mentioning the central problem: the $222 trillion present value of the unfunded liabilities of the off-budget deficit, meaning the deficits of politically sacrosanct Social Security and Medicare. This is the heart of the federal government’s highly entertaining Punch and Judy show over the deficit, with Paul Ryan as Punch and Obama cross-dressing as Judy.

I commented over at Peter's place that we are going into the most predicted and preventable economic collapse in history.   If you believe that collapse is preventable, look at the mismanagement by the elected officials of both parties.  Congress hasn't passed a budget since Obama took office - the Senate refuses.  Deficit reduction commissions like Simpson-Bowles are routinely ignored, and even the meager Ryan plan isn't adhered to.  The secretary of the treasury told Ryan (about the CBO statement that the economy is going to collapse in a few years), "we don't have a plan, we just don't like yours".  The obvious conclusion is that the collapse is deliberate.

It's not that hard.  This is 7th grade math at best.