A couple of weeks ago, someone pointed out that the Brunton Explorer2 solar chargers were available at substantially lower prices than usual.  The MSRP on that website is $96, and Amazon has them listed for $79.  A quick eBay search shows them for $30 on "Buy-It-Now" and auctions starting less.  This is described as a USB charger, 5V at about 1000 mA, certainly enough to charge an iPod or some similar devices.  At that price, I grabbed a couple. 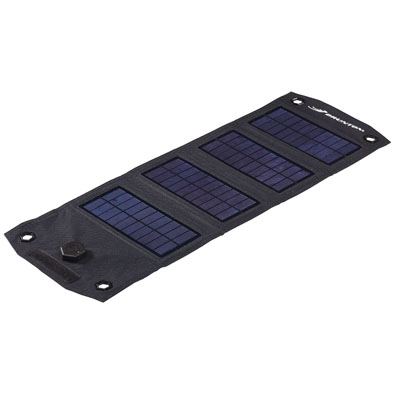 The USB charger is in the little hexagonal nub on the left in this picture.  A little online reading will tell you that not everything charged over USB is happy with this dude.  For example, my Garmin GPS is happy with it but my iPhone 4s isn't.  An older Samsung cell phone is happy, as is my Nikon S4000 point and shoot digital camera.  A foldable solar cell array for $30 is not a bad price, so  even if it doesn't charge everything you'd like, it still might be hackable.

To begin with, let's pop the cover off the little charger module.  Inside, you'll find this: 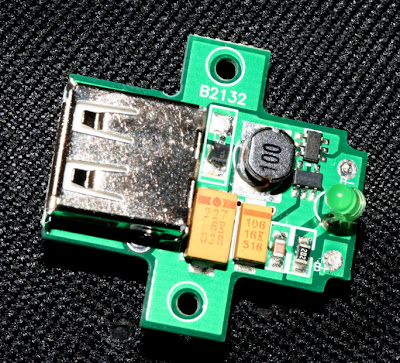 You might recognize the large shiny thing on the left as the USB jack.  Electronics geeks will probably recognize everything else; it's a switching power supply with an LED that glows to show you it's doing something or other.  The switching controller is probably the six pin (SOT-23) package at upper right; the five pin (SOT-23) package below it might be a dual transistor, and the large part that says "100" on it is the coil for the switcher.

The next step was to unsolder it from the wires, so that I could look at the panel itself.  The solar cells put out about 5.5V with a short circuit current of about 750-800 mA (it was getting kind of late in the afternoon, so it might do better at noon).  Two of them in parallel should put out twice that, with some voltage drop (0.2 or so) in Schottky diodes (many people recommend these when combining panels).   I frankly don't see how it could really provide 5V at 1000 mA, as their web page says.  Maybe for a short peak on a good day (or "downhill with the wind at its back" to use my cycling term).

On its own, the panel will charge 3 AA NiCads or NiMH batteries in series.  I wouldn't even use a voltage regulator for NiCads.  Most cheap chargers are just a transformer and a single diode to half-wave rectify the AC.  You would need to put 3 of these in series to charge a 12V lead acid battery.  That should be able to keep a rarely or lightly used battery topped off, but at 800 mA, it would take forever to recharge a dead starting battery.  Two in series would take care of a 6V gel cell, and those are pretty common.

An interesting use for the solar cells occurred to me while playing around with this.  I have halogen lights in my kitchen, and I find that putting the panel on the table produces usable output from the solar cells.  I tend to leave the kitchen lights on, which is wasting electricity and a habit I need to break if we're living in a grid down situation, but here's a way to scavenge some of that wasted energy; use it to top off some batteries!  That's completely stupid if you're using it as an approach to charge batteries, but if the lights are on anyway, you can harvest some energy instead of just warming your table top.

More to come on experiments with this cheap little solar panel.