If You're Driving Into Florida This Year

The U.S. Court of Appeals has upheld a lower court ruling that if you attempt to pay a toll on any of the state's toll roads with a large bill (sometimes "large" meant a $5 bill!) you may be detained as long as they feel like detaining you.


Motorists can be held indefinitely at toll booths if they pay with large denomination bills, according to a federal appeals court ruling handed down Wednesday. A family of drivers -- Joel, Deborah and Robert Chandler -- filed suit last year arguing they were effectively being held hostage by the Florida Department of Transportation (FDOT) and the private contractor in charge of the state's toll road, Faneuil, Inc.

Under FDOT (Note: Florida Department of Transportation - SiG)  policies in place at the time, motorists who paid with $50 bills, and occasionally even $5 bills, were not given permission to proceed until the toll collector filled out a "Bill Detection Report" with data about the motorist's vehicle and details from his driver's license. Many of those who chose to pay cash did so to avoid the privacy implications of installing a SunPass transponder that recorded their driving habits. They were likewise unwilling to provide personal information to the toll collector, but they had no alternative because the toll barrier would not be raised without compliance. FDOT policy does not allow passengers to exit their vehicle, and backing up is illegal and usually impossible while other cars wait behind. FDOT dropped the Bill Detection Reports in 2010. [emphasis added - SiG]

For a state that gets such a large percentage of its GDP from tourism, this is a mind-bogglingly stupid policy, but we are pretty full of stupid policies in Florida.  How is someone coming into the state by road supposed to have the "SunPass" transponder?  Do they expect everyone driving into the state to stop and buy a transponder, register it online, and put money in their SunPass account before they do everything?


"The fact that a person is not free to leave on his own terms at a given moment, however, does not, by itself, mean that the person has been 'seized' within the meaning of the Fourth Amendment," the court wrote in its unsigned decision. "In Florida, a person's right and liberty to use a highway is not absolute; it may be regulated in the public interest through reasonable and reasonably executed regulations."

This decision - and the policies it comes from - represent a giant steaming pile of Court Justices.  If being held by the government is not considered seizing, what is?  If holding someone a few minutes while the background information is taken doesn't constitute seizing them, what about holding them a half hour?  How long does it have to take?  If a person doesn't have a right to use a highway, then how are they to get around the state?  One can't walk; ignoring the impossibility of avoiding private property, the state is too freaking big and too much of it is swamp.  Excuse me - wetlands.  I don't live anywhere near one of the state's borders, southern tip or the keys, yet I drove 9 hours on the interstates, and changed time zones to get to my son's former home in Panama City Beach - and that was still at least an hour's drive away from the western end of the state. 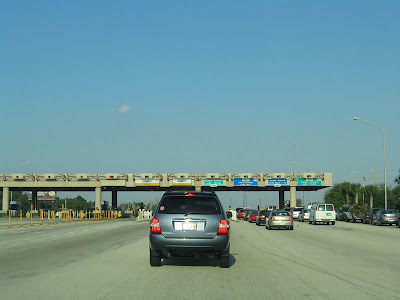 I should add that it's possible to get around the state without ever venturing onto a toll road.  Historical routes like the old US1, A1A or US441 aren't tolls roads; or you can stay on the interstates but just watch the signs.  For example, I-75 south into the center of the state merges into the toll road Florida Turnpike around Wildwood, and you have to make a move to not end up on the toll road.  (If I remember that interchange correctly).  There may be a few places you can't get to without a toll.

This is just another swipe at liberty, and the ability to go where and when one chooses.  H/T to SurvivalBlog