Back in May, I wrote about the case of the Motel Caswell, a piece of property that was being sued by the city of Tewksbury, Massachusetts in a rather obvious attempt to seize the motel for a city asset.

Welcome to the world of civil-forfeiture, where anything you own can be seized by increasingly desperate governments to obtain operating funds - or luxuries for the government workers.  It's not that this is a new problem, but the problems is only getting worse.


The Obama administration is making it easier for bureaucrats to take away guns without offering the accused any realistic due process. In a final rule published last week, the Justice Department granted the Bureau of Alcohol, Tobacco, Firearms and Explosives (ATF) authority to “seize and administratively forfeit property involved in controlled-substance abuses.” That means government can grab firearms and other property from someone who has never been convicted or even charged with any crime.

Don't jump at the "property involved in controlled-substance abuses", that's a red flag to distract you.  The problem is the last sentence, that Fed.gov, "can grab firearms and other property from someone who has never been convicted or even charged with any crime".  There is no evidence the prosecutors ever roll things like this back in the direction of more liberty and if you believe this will only apply to "the war on drugs", I've got a bridge to sell you.  Fed.gov prosecutors always push for seizing more property.  The Washington Times, again:


It’s a dangerous extension of the civil-forfeiture doctrine, a surreal legal fiction in which the seized property — not a person — is put on trial. This allows prosecutors to dispense with pesky constitutional rights, which conveniently don’t apply to inanimate objects. In this looking-glass world, the owner is effectively guilty until proved innocent and has the burden of proving otherwise. Anyone falsely accused will never see his property again unless he succeeds in an expensive uphill legal battle.
...
James Lieto found out about civil forfeiture the hard way when the FBI seized $392,000 from his business because the money was being carried by an armored-car firm he had hired that had fallen under a federal investigation. As the Wall Street Journal reported, Mr. Lieto was never accused of any crime, yet he spent thousands in legal fees to get his money back.  (emphasis added - SiG)

This guy loses $392,000 and has to spend thousands at trial to get his money back because he hired someone that the Fibbies were investigating?  Something that, as far as I can find he was absolutely not responsible for?  What kind of crap is this?  As I said in that post last May,


Governments bully small guys who can't afford teams of high-powered lawyers.  They're easier to screw over.

Online publication Directory Journal takes it farther with "They ARE Coming for YOUR Car, Your Land, Your House"  They link to the story of Donald Scott, killed by police in 1992, in what appears to be a case motivated by wanting to acquire his property.


In Malibu, California, park police tried repeatedly to buy the home and land of 61-year-old, retired rancher Don Scott, which was next to national park land. Scott refused. On the morning of October 2, 1992, a task force of 26 LA county sheriffs, DEA agents and other cops broke into Scott's living room unannounced. When he heard his wife, Frances, scream, he came out of his upstairs bedroom with a gun over his head. Police yelled at him to lower his gun. He did, and they shot him dead.

Police claimed to be searching for marijuana which they never found. Ventura County DA Michael Bradbury concluded that the raid was "motivated at least in part, by a desire to seize and forfeit the ranch for the government . . . [The] search warrant became Donald Scott's death warrant."

They include stories of people like breast cancer survivor Lisa Lindsey who is in modern debtor's prison for not paying a medical bill she received in error, and was told to ignore.   Or the people who have lost their homes over an unpaid utility bill.  Or people who lost their home over imminent domain so that cities could generate more tax income.  Or the several stories of people who lost cash they were carrying - life's savings or an insurance payout or government-demanded cash bail - because a drug sniffing dog reacted to the money (or, more likely, reacted to their handler's mood).

The ISIL quotes Brenda Grantland, asset-forfeiture defense attorney as saying:
If you read those links in here, including the ISIL and Directory Journal, and your blood doesn't boil, you might want to check your pulse.  You're probably dead.

And if you think it can't or won't happen to you because you've done nothing wrong, congratulations; you are dead. 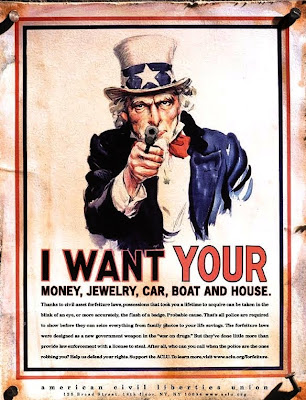 Posted by SiGraybeard at 7:25 PM