Took the day to meet a friend down at our club rifle range.  He was sighting in a new scope on an AR, and since I haven't shot my DPMS LR-308B for a long time, it's a good excuse to go throw some 150 grain bullets down range.  It's always easy to get Mrs. Graybeard to go for a morning at the range (although when an alarm goes off on a Sunday, I seriously doubt my sanity). For reasons I can't claim to understand, she has wanted a lever action rifle for a while, and we finally settled on a Marlin 336XLR in time for a birthday present last month - this model is stainless, laminated stock, in 30-30. So she still has some time to go with the Marlin before it's second nature. 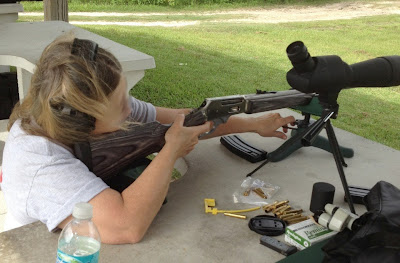 Alarms on Sunday?  I know it was the equinox yesterday and it's officially fall, but it's still summer here and will be for a while.  Today, it was still 90 and humid at noon.  It's best to get out early and get out of the sun before it gets too bad.

I brought my home built AR-15, too.  Didn't shoot it much, but it's nice to put cross hairs on a target at 200 yards and have it hit exactly where it's supposed to.  Yeah, I can get careless, but the gun is dialed in now, and "just works".  Friend got his AR sighted in acceptably.  We shot each others' LCP/TCP to compare them.  A moderate amount of powder was burned and a nice time had by all.  No target pictures.  Left without going back down range.

Posted by SiGraybeard at 7:33 PM