As a friend said:  Today is Constitution Day.  Read it and weep.

Someone cranked up the Quick Meme generator and there already are almost 1500 copies of posters based on the photo of the arrest of film maker Nakoula Basseley Nakoula.  H/T to Sister Toldjah and PJ Tatler. Zombie on PJ Tatler lists several of his favorites, and I include two my favorites here: 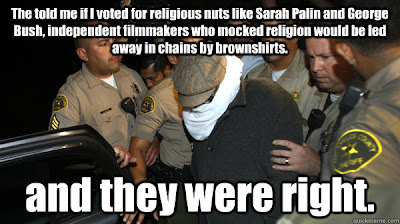 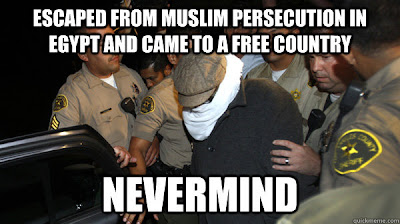 There's a lot of really good ones in there, and a lot of repetition.  It's your time, but look around.

Frederick Douglass said in an 1860 speech, "Liberty is meaningless where the right to utter one's thoughts and opinions has ceased to exist.  That, of all rights, is the dread of tyrants.  It is the right which they first of all strike down".

While the first amendment may be under more threat today, don't forget the attacks on pretty much all religions except Islam, the second amendment is under constant threat from outsiders.  The Supremes may have been marginally accommodating to the right to bear arms, the same doesn't apply to the UN.  So, yeah, the last meeting of the UN Arms Trade Treaty broke down, but they're still working on it.

The fourth is pretty much gone, between the TSA's groping children and randomly seizing cupcakes, no-knock SWAT raids,  and courts ruling, for example, you have no right to resist police entry into your home even if it's unlawful entry.

Of course, the constitution is more than just the Bill of Rights.  They're tearing it all apart at an amazing rate.  Time to read it before it's all gone.