Time for Our Annual Pilgrimage to Orlando

Orlando is best known as home to Walt Disney World, Sea World, Universal Studios and a few other theme parks, but no mice, killer whales, or movie characters were involved.  Today was our annual visit to the Orlando Hamcation, which we have been doing without missing a year since 1982.  The Hamcation's website says that they are now the number two hamfest in the country, behind the Dayton Hamvention.  "Dayton" is now Dayton in name only; the hamfest moved to Xenia, Ohio last year when the city of Dayton closed the convention center/arena where it had been held, and Hamvention won't be in Dayton for the foreseeable future. 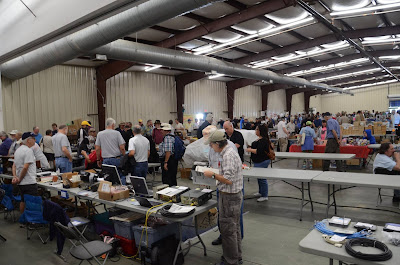 (A view across the north hall, one of three halls full of displays, in 2017 - Orlando Hamcation photo)

As we did last year for the first time, we decided to attend on Friday this year.  The major hamfests seem to be selling themselves more as vacations than for locals, so if one is taking time off from work to travel hundreds of miles to a ham radio convention, taking the extra day to go on Friday vs. Saturday isn't a big deal, and Sundays have been marginal at best at hamfests for as far back as I can recall.  The most crowded days are going to remain Saturdays.  Going on Friday, we got excellent parking, crowds are much easier to live with, and the whole experience is just better.

What was familiar was: essentially everything.  There was the usual collection of old radios, some in use for over half a century, along with radios from every decade since then.  If anything, a larger number of dealers were selling the various brands of Chinese VHF/HF handie talkies like Baofeng, Wouxun and others.  That said, there were some new radios on display and I stopped for literature at a few place.

Speaking as a guy who spends a lot of time running a barbecue smoker, the folks who do the barbecue there put up a fine lunch.  $8 for a stuffed brisket or pulled pork sandwich is really in line with what you pay in a sit-down restaurant, and it's good barbecue.

There were predictably more drones for sale.  What was missing was that there didn't appear to be any big product announcements going on.  I saw fewer Arduino project kits although they remain well-supported, and given that I've probably seen a dozen web-based projects that made a CNC-driven laser wood burner out of a DVD drive LED, I expected to see something like that.  Nope.  Likewise, not a single 3D printer.

The weather was good; while it peaked out at around 80 maybe 82, the skies held enough clouds to keep the sun from beating down too much while not giving any rain.  The only things I picked up were some accessories for the station, especially while testing things: coaxial connector adapters and some test cables.