Interesting Play Day at the Range

I've written here many times over years about reloading and, since last summer, about my Ruger Precision Rifle in 6.5 Creedmoor that I got on a good sale last July (and even through another six months of sales in the gunny world, still a good price though not the very best).  Naturally, those two should go together, and the idea of doing precise handloads for the RPR has been at the front of my mind.  I bought dies for my RCBS Rock Chucker before I even had the rifle and have added some Berger "Elite Hunter" bullets in the 140 grain size the rifle seems to like.  The hardest component to acquire has been what seems to be the consensus choice for best powder, Hodgdon H4350.

NRA's Shooting Illustrated did a story on the 6.5 Creedmoor and keeps using the analogy of the "Perfect Storm".  On powders, they say,


... consider Hodgdon’s H4350 propellant. ... In the early days of production, Hornady, which makes reloading tools and components as well as ammo, published recommended hand-load data on the boxes of factory ammo using H4350 powder. Millions of shooters discovered that it worked so well, their search for the perfect handload started and ended right there.

In a normal handloading world, that would be a footnote in the cartridge introduction for future reloading manuals. In this perfect storm, it means there is a world-wide, multi-year shortage of H4350. Hodgdon is making and shipping more of the stuff than ever, but this huge popularity has caused the demand to far outstrip supply. It’s gone on for years and shows no signs of abatement. I have never seen anything like this and neither has Chris Hodgdon. He tells me that the company breaks records every month for the amount of H4350 shipped and still can’t meet demand, all because of the 6.5 Creedmoor. One cartridge, used almost exclusively for one purpose, is driving the H4350 market to unheard of heights. That is something the shooting world has never seen before.

I can verify that I've been looking for H4350 on every "Powder Sale" to cross my email since July and have yet to see in stock anywhere.  To date, I've had my best results with 140 gn Hornady ELD-M rounds, and I think it was one that talked about reloading with H4350 (I swear I recall seeing that on one of the first boxes I bought).  Chris Hodgdon goes on to recommend another powder his company makes:


Chris Hodgdon recommends using Enduron IMR4451. He told me, “It’s relatively the same burning speed as H4350. Enduron is temperature insensitive like H4350, plus it has copper-fouling-reducer technology.”

IMR4451 seems to be more available, but ordering powders and working up loads is Research and Development, and other powders might be worth looking at.  Reloader 17, and the newer RL16 may be better (according to what "they say").  IMR4350 is another to investigate.  The only two rifle powders I have on hand are Hodgdon Varget and H4895.  Neither is recommended - but might produce serviceable reloads.

One of the things people recommend, and one that has come up around here a few times, is to use a chronograph.  A week ago last Saturday was my birthday, and I finally decided to treat myself to one, the MagnetoSpeed Sporter.  Today, I thought it was a good day to try it out at range.  Since I don't know anything about it, nor did I particularly trust it to work "first time, every time", I brought my AR and two boxes of factory 55 grain FMJBT PMC ammo, along with my Savage Scout rifle and a box of Winchester 7.61x52 147 grain.

Unlike most chronographs, the MagnetoSpeed design straps to your barrel, and instead of detecting the bullet by optical means, senses it with a magnetic field.  The Sporter model differs from the "big brother " V3 model by including fewer options for attaching to the gun, so I suspect it isn't as versatile for things like pistol reloads, but that's lower priority to me.   Besides, I think that stuff may be available - or copyable if you know someone with a machine shop. 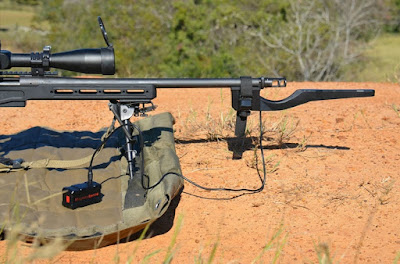 The advantages over the typical chronograph are substantial: no tripods to carry and set up, no wires between the tripod and shooting bench, no susceptibility to light and passing cloud shadows, no need to have the range go "cold" if the wind blows the tripod and chrony over.  The disadvantage is that the weight on the end of the barrel is going to mess up its harmonics and affect your point of impact.  It seems that might make the load development process a bit more iterative.  Develop a given speed and then test that speed without the Sporter hanging from the barrel.

The ultimate solution to that is probably something like Lab Radar, which has all of the same advantages as this, but doesn't hang from the barrel and change the point of impact.  At over 3x the price, a Lab Radar is not in the cards for me for the foreseeable future.

One of the attractions of the MagnetoSpeed system is that they have a small accessory to allow you to download the captured session to your Android or iPhone device, and a free app in Google Play or iTunes store.  The app makes looking through the data you've taken easier than clicking through it on the control box that the sensor plugs into, and can then email the date to you as a Comma Separated Variables (.csv) file to load into your favorite spreadsheet program.  For example, here's the spreadsheet from the box of Winchester 308 I shot.
The ES value is Extreme Spread, or (Max - Min); S-D is the standard deviation of the series.

I feel pretty comfortable with the MagnetoSpeed now, after the first trip.  It gave me a couple of absurd values across two boxes of .223 - real WTF? values that you throw out when you see them.  In my case, it had one round at 4419 fps and the other at 3960.  If you care about the analysis and stats, you can do those in your spreadsheet.  I did.  It seems like the way to approach this might be to load eight of each weight of powder; four for the chronograph and four for a group.  Or three each with two spares.