Struggling To Find the Truth

Item the first:  Did Trump ban bump stocks?  That was the buzz starting last night about this time.  By morning everyone was on the story and you couldn't get five minutes of a talk radio show without someone saying, "Trump lost me on this one".  Or the converse, "I'd give up bump stocks for national reciprocity" - or something.  But it really looks like Trump did nothing about bump stocks.  John Richardson at No Lawyers, Guns and Money linked to the entire text of the memo.  I excerpt it here.


Accordingly, following established legal protocols, the Department of Justice started the process of promulgating a Federal regulation interpreting the definition of “machinegun” under Federal law to clarify whether certain bump stock type devices should be illegal. The Advanced Notice of Proposed Rulemaking was published in the Federal Register on December 26, 2017. Public comment concluded on January 25, 2018, with the Department of Justice receiving over 100,000 comments.

Today, I am directing the Department of Justice to dedicate all available resources to complete the review of the comments received, and, as expeditiously as possible, to propose for notice and comment a rule banning all devices that turn legal weapons into machineguns.

Although I desire swift and decisive action, I remain committed to the rule of law and to the procedures the law prescribes. Doing this the right way will ensure that the resulting regulation is workable and effective and leaves no loopholes for criminals to exploit. I would ask that you keep me regularly apprised of your progress.

You are authorized and directed to publish this memorandum in the Federal Register.

That's not banning anything.  It's saying, "hurry up and review the comments you received to your NPRM (Notice of Proposed Rule Making)" that closed on January 25, and make a decision.  Then it says create a possible rule and prepare an NPRM banning all devices that turn legal weapons into machine guns.  It doesn't say what the answer should be or put the words in anyone's mouth to ban bump stocks or anything else.  If there's one thing I'm sure of, banning bump stocks would do nothing except hurt some small companies or run them out of business.

Item the second:  What about the other gun control proposals going around?  Raising the age to buy a long gun, or the ever-popular "Universal Background Checks"?  Quinnipiac released a poll yesterday saying


Support for universal background checks is itself almost universal, 97 [to] 2 percent, including 97 [to] 3 percent among gun owners. [added "to" - SiG]

I've always heard that when this particular question is asked, the vast majority of respondents don't understand what it means, and that when the questions are detailed, support for things like background checks for private sales drops down to the 50/50 range.  Once it's explained that there is no "gun show loophole".  This poll doesn't expand on that.

The poll is staggering and really looks like it could indicate trouble coming.  There's wide support for an assault weapons ban, mandatory waiting periods to take home a gun you purchased. 91% of Democrats and 69% of independents think it's too easy to buy a gun in the country.  There's a clamor for more laws, to make it harder to buy and keep a gun.  The amount of defective thinking is simply mind-boggling.  It's difficult to read the results because they're spread over dozens of screens, but interesting reading.

Of course, it's just one poll and I know nothing of systemic biases in it.

It's obvious if you spend 10 seconds listening to these kids in front of the president or the Florida legislature that they're being played by someone.  They don't know what they're talking about and either state things that are blatantly wrong, or just emotional junk.  Who's pulling the strings?  Bloomberg?  Soros?  Don't know, don't care.  Everything on the media since the shooting has been nothing but politics.  If the kids are actors, they're not particularly good actors; they're over actors.

I think No Lawyers, Guns and Money, had a QoTD that's a perfect way to end this:


Just last week, Congress was calling on Tide to change the design of the Pods so teenagers would stop eating them. This week, teenagers should determine gun policy. 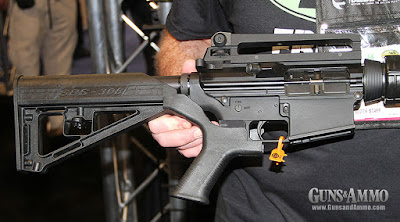 Slide Fire AR-10 Bump Stock, the SBS-308.  I'll be honest, I never particularly cared enough about these to buy one, but if someone wants one, I don't see the problem.