School Shootings are Not Getting More Common

An interesting study out of Northeastern University made little news today because it flies in the face of the common narrative.  The study was entitled, "Schools are safer than they were in the 90s, and school shootings are not more common than they used to be, researchers say".

While I always look for things that contradict what I think, or contradict the accepted wisdom, the mainstream media only wants to reinforce their narratives.  The work was done by James Alan Fox, the Lipman Family Professor of Criminology, Law, and Public Policy at Northeastern, and assistant Emma E. Fridel also of Northeastern University.

According to the study, mass school shootings were more common in the 1990s than this decade.


Four times the number of children were killed in schools in the early 1990s than today, Fox said.

“There is not an epidemic of school shootings,” he said, adding that more kids are killed each year from pool drownings or bicycle accidents. There are around 55 million school children in the United States, and on average over the past 25 years, about 10 students per year were killed by gunfire at school, according to Fox and Fridel’s research.

On a per capita basis, over the past 25 years, "about 10 students per year" works out to 0.18 deaths per million students per year.  Looked at that way, it really is rather safe in schools.

You know that often-repeated lie that there have been 18 school shootings so far this year?  Dr. Fox brings the truth:


Since 1996, there have been 16 multiple victim shootings in schools, or incidents involving 4 or more victims and at least 2 deaths by firearms, excluding the assailant.

Of these, 8 are mass shootings, or incidents involving 4 or more deaths, excluding the assailant.

This graphic, from the article, is a little tough to read, but each darker dot shows one person killed and each lighter dot shows one person injured.  Columbine stands out in 1999.  Sandy Hook in 2012 stands out for its extreme ratio of dark to light color.  The Stoneman Douglas shooting is on the far right (below the less-awful Kentucky school shooting).  Unfortunately, this graphic doesn't go to 1990, so that we could visually compare the early '90s to today.

It's not just school shootings, which are the classic example of the kind of extreme story the media loves: bleeding children sell (Dana was right).  Mass murders as a general class have also been declining since the 1990s, just has violent crime in general has been declining. 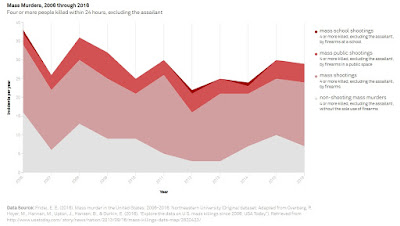 This graph is a little tougher to read because the vertical color bands are too similar, and it's a small dataset in time, but the bottom gray color shows non-shooting mass murders; at least 4 murder victims, excluding the assailant (all of these exclude the assailant).  The lightest "brick" color (on my monitor) represents a mass shooting; again, at least 4 killed.  The middle color is public mass shooting; with at least 4 victims - places like malls or transportation.  The darkest red is a mass school shooting with at least 4 killed.

I should point out that Dr. Fox is not a fan of the almost universally recommended approaches to fix the problem (which he doesn't see as a crisis).  He's opposed to hardening access control:


In addition to being ineffective, Fox said increased security measures of these kinds can do more harm than good. He called the suggestion to arm teachers “absurd” and “over the top.”“I’m not a big fan of making schools look like fortresses, because they send a message to kids that the bad guy is coming for you—if we’re surrounding you with security, you must have a bull’s-eye on your back,” Fox said. “That can actually instill fear, not relieve it.”

His co-author, Emma Fridel, said she's opposed to obviously armed guards (I am as well, but for different reasons; I think a random number of concealed carriers makes it harder than "just shoot the guard first").


After the Columbine High School shooting in 1999, schools across the country began holding active shooter drills in which they huddled together in a corner or hid under their desks. Such exercises—which may include someone walking around pretending to shoot students—can be very traumatic, Fridel said, and there is no evidence that they help protect students. “These measures just serve to alarm students and make them think it’s something that’s common,” she said.

Dr. Fox said that while he likes gun control he thinks nothing proposed will affect school shootings.


Banning bump stocks and raising the age of purchase for assault rifles from 18 to 21 are good ideas, and may lead to a decrease in overall gun violence, he said. But he doesn’t believe these measures will prevent school shootings. “The thing to remember is that these are extremely rare events, and no matter what you can come up with to prevent it, the shooter will have a workaround,” Fox said, adding that over the past 35 years, there have been only five cases in which someone ages 18 to 20 used an assault rifle in a mass shooting.

I heard of this study on Glen Beck's radio program today and searching for it tonight I can only find it in smaller and "new media" outlets.  We can take odds on whether a study like this would make it onto CBS/ABC/NBC/CNN/MSNBC/Fox and so on.  For now, we should spread it ourselves.