Best Science Story in A While

Thanks to a link on Watts Up With That, we learn about a bacteria that refines and excretes gold.  That's right.  It literally absorbs metal-contaminated water and poops gold.  (Journal abstract)


High concentrations of heavy metals, like copper and gold, are toxic for most living creatures. This is not the case for the bacterium C. metallidurans, which has found a way to extract valuable trace elements from a compound of heavy metals without poisoning itself. One interesting side-effect: the formation of tiny gold nuggets.

This bacteria ordinarily lives in soils that are laced with copper and toxic metals.  Over time, some minerals break down in the soil and release these heavy metals and hydrogen (acid) into their environment.


“Apart from the toxic heavy metals, living conditions in these soils are not bad. There is enough hydrogen to conserve energy and nearly no competition. If an organism chooses to survive here, it has to find a way to protect itself from these toxic substances,” explains Professor Dietrich H. Nies, a microbiologist at MLU.

MLU is Martin Luther University Halle-Wittenberg in Germany.  The other co-authors were at the Technical University of Munich (TUM) and the University of Adelaide in Australia.  Professor Nies and his Australian counterpart, Professor Frank Reith, concluded that C. metallidurans is able to deposit gold biologically back in 2009 but only now have elucidated how they do it.


Gold enters the bacteria the same way as copper. Copper is a vital trace element for C. metallidurans however it is toxic in large quantities. When the copper and gold particles come into contact with the bacteria, a range of chemical processes occur: Copper, which usually occurs in a form that is difficult to be taken up, is converted to a form that is considerably easier for the bacterium to import and thus is able to reach the interior of the cell. The same also happens to the gold compounds. 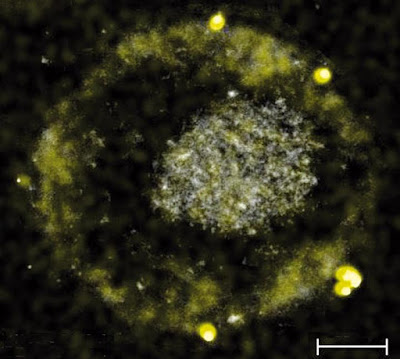 (Micrograph of the bacterium with five small gold nuggets it excreted.  Below, a small body of the excreted gold nuggets.  Both pics from WUWT) 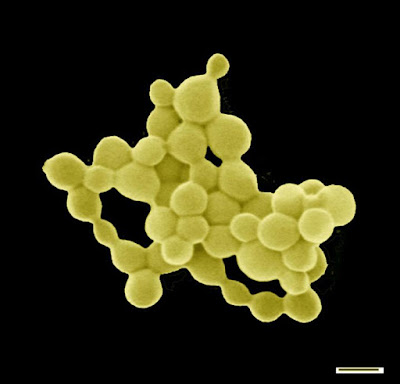 I find this fascinating.  First, I think of gold as a noble metal that's notoriously hard to get into chemical reactions, at least the first step of dissolving gold and forming a salt or other compound.  Yet bacteria are able to perform complex reactions on the gold and (much more reactive) copper.  Secondly,  I don't know a whole lot about gold deposits, but it makes me wonder if some of the gold that's found today is the result of bacterial pooping over thousands of years.