Science Photo of the Year

Look closely at the center of this photo: 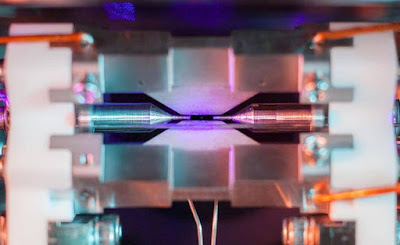 There's a small dot visible in the apparatus, between the two turned-metal rods that taper down to tiny pins and the the two trapezoidal features that come down from the top and up from the bottom.  That bright spot is one single strontium atom, fluorescing in ultra violet light.

The Engineering and Physical Science Research Council of the UK, EPSRC, has named this the photo of the year for 2017.  The description begins:


An image of a single positively-charged strontium atom, held near motionless by electric fields, has won the overall prize in a national science photography competition, organised by the Engineering and Physical Sciences Research Council (EPSRC).

‘Single Atom in an Ion Trap’, by David Nadlinger, from the University of Oxford, shows the atom held by the fields emanating from the metal electrodes surrounding it. The distance between the small needle tips is about two millimetres.

When illuminated by a laser of the right blue-violet colour the atom absorbs and re-emits light particles sufficiently quickly for an ordinary camera to capture it in a long exposure photograph. The winning picture was taken through a window of the ultra-high vacuum chamber that houses the ion trap.

Note that it said the distance between those two metal pins was about 2mm.  A quick lookup shows the atomic radius of a strontium ion to be around 220 picometer; so since that's about one 9 millionth of the gap, how is it that we see it?  I believe (but they don't say) that the atom itself is too small to see but the fluorescence is too bright to not be captured - much like star light at night to your eyes (on an angular basis, the star is far too small to see).


David Nadlinger, explained how the photograph came about: “The idea of being able to see a single atom with the naked eye had struck me as a wonderfully direct and visceral bridge between the miniscule quantum world and our macroscopic reality. A back-of-the-envelope calculation showed the numbers to be on my side, and when I set off to the lab with camera and tripods one quiet Sunday afternoon, I was rewarded with this particular picture of a small, pale blue dot.”

My guess is his calculations involved the amount of light the atom would be re-emitting.

If you haven't seen individual atoms, they've been imaged regularly for since about 1981 with non-optical methods.  IBM famously spelled out their initials by dragging individual Xenon atoms into place to form the letters on a nickel crystal in 1989.  We could go into pages about what "seeing an atom" means, but that's probably better left for another time.

Posted by SiGraybeard at 7:52 PM