I Think I'm Going To Say I Got This One Right

Back on January 10th, I did a piece on Bitcoin being in a bubble asking rhetorically if it was really a bubble.  I concluded:


I think that yes, it's in a short term overpriced situation.  I think it's possible, even likely, that there needs to be some period of sitting in a trading range and consolidating (strangely, I run across this guy saying the same thing).  People need to settle down a little get some of the fever out of the market.  I think a drop in price of as much as 50% is not out of the question.  However, I also think it has a good future; that there's a real place for cryptocurrencies and they will make a comeback.

Is the bloodletting over?  This is harder to say, but playing technical analyst a bit, here's the last month of closing prices with a trading range I've drawn in. 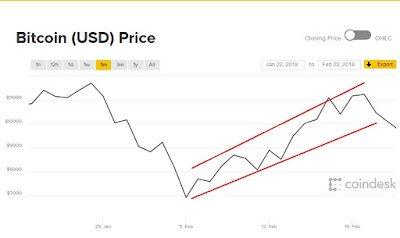 The decline is obvious, as is a turnaround after the Feb. 5th minimum.  The price has been pretty well confined by that increasing price channel - until this morning to be precise.  The next few days will probably tell the tale of whether or not this is a "dead cat bounce" and the price will drop some more, or if that bottom line is close to a "support line" that the price doesn't go below and it continues back up.  It's entirely possible it stays in a trading range around $10,000 for a longer time (six months?) before going up or down.

Remember my definition of technical analysis: drawing lines on a chart of prices and then thinking those lines mean something.

Bitcoin remains an interesting puzzle.  Right now, it seems disconnected from its real intent, but I still think cryptocurrencies do have their place in the long term, big picture.  I firmly believe that there will never again be the equivalent of the increase in price from the legendary first pizza order (10,000 coins for 2 pizzas - now $100 Million), but that an increase from the price paid today is entirely possible.  Now much?  I have nothing to base that on but gut feel, which I'm clearly no good at (if I was good, I would have bought bit coins when they were a few bucks).  If you're looking for the next big shot at making thousands of percent gains, look somewhere else, but gains more like other investments are still possible.