That doesn't refer to the industry undergoing explosive growth, it refers to the 3D printing of explosives.  Machine Design covers the story with input from Los Alamos National Labs (pdf warning).

Whether for movie special effects, planned demolition, or as weapons, it should go without saying that explosives are serious business.  To borrow a phrase from shooting, the two worst sounds in the world are silence when it's supposed to go BOOM and BOOM when it's supposed to be silent.  Despite centuries of work with explosives and the modern use of high speed cameras and computers, there still is much to learn about how explosives work on the shortest time scales


TNT is susceptible to unplanned detonation. This led the team at Los Alamos to develop insensitive high explosives (IHE). These explosives can be hit with a hammer, dropped, or thrown into a fire and not detonate. This might ruin some Hollywood movies, but it might also ruin a timed detonation.

Making an explosive more difficult to detonate when there’s an accident also makes it more difficult to detonate intentionally. Explosives such as TNT’s behavior are largely controlled through hot spots. Introducing inclusions, such as air bubbles, into TNT will trap air inside, causing it to compress and rapidly heat up. The uneven flow into and around these bubbles results in points of intense heat called hot spots. These hot spots largely control the energy necessary to initiate detonation in TNT and other high explosives.

This is where 3D printing is disrupting explosives. With the ability to control material, and voids, Mueller’s [LANL's] team looks to control the release of energy through a sophisticated arrangement of hot spots.

Switching to LANL's explanation for a few words:


During detonation, a chemical reaction zone (CRZ) races immediately behind the supersonic shock wave; the shock-compressed voids in the CRZ generate hot spots and in turn initiate the chemical burn reaction. Because a shock front will move through different materials at different speeds, the type, size, and distribution of hot spots (collectively referred to as the hot-spot profile) can change the size and speed of the CRZ as it travels through the material—this affects the strength of the subsequent blast.

If you've ever seen a cross section  of a 3D print, they have varying amounts of porous space in them. This is primarily for strength and prints made for higher stresses are more solid, but porous space in the explosive mix can help researchers learn about how the explosion forms and propagates. 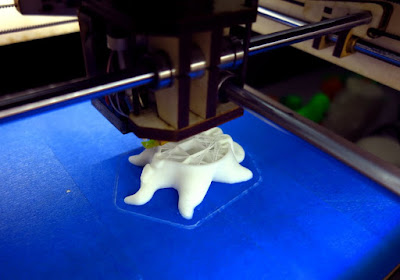 It's also allowing them to experiment with new materials and create new explosives.

A couple of thousand miles away in Indiana, Purdue university researchers are using inkjet-type 3D printing to experiment with their explosive blends.


“It is really just an assembly of commercial-off-the-shelf technologies,” says Jeffrey Rhoads, professor of mechanical engineering and principal investigator on the project. “The key is formulating the proper ‘ink’ and then integrating these components in a way that allows for appropriate mixing, precise printed geometries, etc.

“Our solution is to combine two components as we’re printing them. We can have a fuel and an oxidizer in two separate suspensions, which are largely inert. Then with this custom inkjet printer, we can deposit the two in a specific overlapping pattern, combining them on a substrate to form nanothermite.”

Allison Murray, a Ph.D. candidate in Mechanical Engineering, built the custom inkjet printer.  The feed is a tube that can be electrically constricted to control droplet size while the table moves under the print head.  She says, “The stage can move with a 0.1 micron precision, which is basically a thousandth the width of a human hair.”

Still, they're working with thermite material, which is still exploding, once the proper stimulus is applied.  3ders.org says the newly developed 3D printer works by depositing both a fuel and an oxidizer (two largely inert colloidal suspensions of nanoaluminum and nanocopper (II) oxide in dimethylformamide with polyvinylpyrrolidone) in an overlapping pattern, combining them on a substrate to form nanothermite, a metastable intermolecular composite with small particle size.


The resulting nanothermite reacts just as quickly and powerfully as thermites applied in traditional ways.  “It burns at 2,500 Kelvin [over 4,000 degrees Fahrenheit],” said Murray, “It generates a lot of thrust, a lot of heat, and makes a nice loud shockwave!”

The link to Purdue includes a high speed camera video of a couple of demonstrations, and it's always slightly hypnotic to watch high speed photography of things exploding, even if they're small explosions inside a lab.


“In order to maintain the U.S. nuclear deterrent at a level appropriate for the 21st century, technicians in the Pantex Additive Manufacturing Program have spent the past five years evaluating and implementing dozens of applications for additive manufacturing.

“The team works with a Connex 500 for polymer-based designs and uses an SML 280 for metals. Components that once took weeks or even months to machine can now be made in mere days. The fruit of the team’s labor is evident across the 16,000-acre facility in the hundreds of fixtures now being used. In 2014, the Additive Manufacturing team received an esteemed Defense Programs Award of Excellence for its work.”
...
In addition, the ability to print complex shapes lets users take advantage of topographical optimization, meaning material is only added where needed. This would be expensive, time-consuming, and in some cases, impossible with traditional processes. In a life extension program for the B61-12, which is a nuclear weapon, topographical optimization is able to make a new fixture that saves cost, weight, and time, while increasing strength. 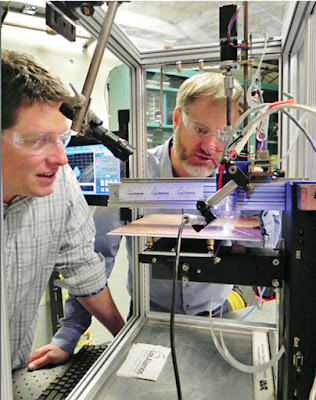 I find this interesting because of the spillover into new fields that follows the introduction of a new technology.  As the Purdue article said, “Energetic materials is a fairly understood field, and so is additive manufacturing.”  Taking advantage of the additive manufacturing techniques to produce exactly the characteristics of  an explosive that are wanted for study is neat combination of the two.