Rand Paul famously shut down the government briefly in the early hours of the morning on Friday to make a point.  This prompted washed-up, old singer Better Midler to tweet, "where's Rand Paul's neighbor when we need him?" in apparent yearning for the days when his neighbor assaulted him for no apparent reason.  Senator Paul was quoted as saying,

He's right.  In fact $1 million a minute is too optimistic.  The official number from the Federal Reserve Bank of St. Louis (FRED) is that in 2017 the US ran a budget deficit of $666 billion.  The conversion is easy, and if you count every minute of the year (all 525,600 of them), that gives a spending rate of $1.27 Million per minute.  The budget plan is projecting a deficit of $800 billion in FY '18.  That's $1.52 Million per minute.  The Committee for a Responsible Federal Budget (CRFB), an independent think tank, projects that the deficit for FY '19 will balloon to $1.2 trillion in FY 2019, or $2.3 million per minute. 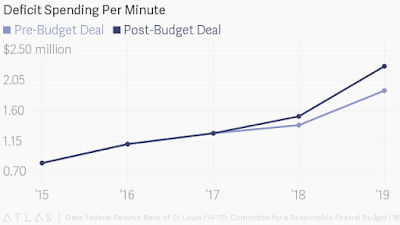 Data from FRED, projections from CRFB, posted at the Daily Caller's Fact Check.

Long time readers will know that I'm a deficit hawk and believe this is eventually has to stop; a classic example of "things that can't go on forever, won't go on forever".  The amount of borrowing has to eventually hit a stop.  The world isn't infinite, and neither is money that's worth anything.

These, though, are unprecedented times.  First and foremost is that while the market appears to have firm foundations for the first time in a long time; to borrow a line from Tom Aspray in Forbes:


Therefore, those who look at the market from a fundamental standpoint  have trouble turning bearish right now, since the only fundamental concern is rising rates, while earnings and the economy are strong.

Simply, in a week the major indices retreated back in time two months to the second week of December.   The companies that were reporting earnings were reporting good, solid earnings and there's no reason to think they're less valuable than they were two weeks prior.  There's simply no reason to dump those stocks.  Unless the concern is looking forward into the year and wondering if the Fed is going to raise interest rates more than originally slated.  Very simply, money chases yield and if bond yields go up, that would tend to move money out of the stock markets and into bonds.

Why would the Fed raise interest rates?  That's their response to too much inflation and the Fed seems institutionally unable to separate its own currency manipulations from inflation or recession.  For the last decade they've been telling us inflation is under 2% as we've paid more for smaller packages and watched what appears to be 8 to 10% inflation every year (Shadowstats, in 1980 terms, bottom graph).  None of that bothered them, but increases in wages have them ringing the klaxons and preparing for disaster.

Trump is the first president I can think of who has specifically stated he wants to raise wages for the middle class and there's evidence it's happening.  Rising wages are something that Janet Yellen and Ben Bernanke before her always talked about as if it was the apocalypse.  One of the main aims of the Fed seemed to have been to keep wages from rising - and they seem to have been effective at doing it.

The point is, though, Rand Paul was right.  The country is borrowing more than a million dollars a minute, and that can't go on.  It might not crash this year, or next year, but it will sooner or later and it's better to try to land a crippled aircraft than wait until its really desperately awful trouble.  The answer, as it has always been, has to be to stop kicking the can down the road, and start cutting spending and working toward balanced budgets.  Which requires being adults, and very, very few in Washington have shown that tendency - as the president's proposed $1-1/2 Trillion dollar infrastructure plan shows. 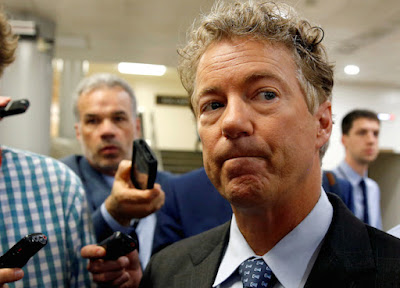