America is NOT A Violent Culture

I'm personally tired of hearing the gun control nuts saying we're an unreasonably violent culture.  We are not, as whole.  Proof?  Look no farther than former USA Gymnastics team doctor Larry Nassar.  If any of the fathers of any of those sexually abused girls was as violent as the Demanding Mommies say Americans are, that MoFo would have long ago been dead and buried in an unmarked grave in the woods.  He's up to 175 life sentences now.  Some time in the last 20 years, one dad who listened to his daughter could have fixed this, and could have saved a lot of girls and their families from a lot of suffering.  No one needed to know.  The daughter that faced it didn't need to know why the doctor was suddenly replaced.

The dad that made a scene in the courtroom today did it all wrong.  While I admire his honesty, first of all, he should have done it years ago (I couldn't find out how long ago his daughters were involved) and second, don't do that with a court full of security unless you're playing "hold me back" and don't intend to do anything.

So please, Shannon, Bloomie, don't tell me we're a violent society.  Don't tell me every single time that any modest extension of self defense law, like Utah's move to adopt the nearly 150 year old stand your ground doctrine, or allowing concealed carry reciprocity, is going to result in "blood in the streets" or "gun fights over parking spaces".  It has never happened, and it won't ever happen. 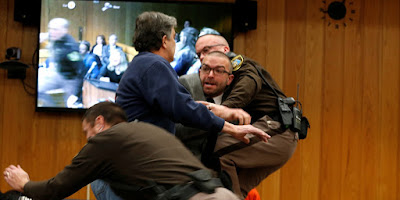