SpaceX's flagship Falcon Heavy apparently had a fully successful test flight today, boosting Elon Musk's own Tesla Roadster into orbit and recovering both of the strap-on Falcon 9 boosters.  As I'm writing this, a successful recovery of the central Falcon 9 first stage is not confirmed.  It's pretty common for the turbulence of the landing to cause loss of the signal, but that has typically come right back.  If an antenna was damaged, that would make it difficult to know.  The drone ship "Of Course I Still Love You" is unmanned during a landing, but a crew boards it later to secure the booster.  I don't know the protocol for how long they wait before doing that.

The two side boosters of the first stage have flown before. One launched the Thaicom 8 communications satellite in May 2016, and the other lofted a Dragon cargo ship to the ISS for NASA in July 2016, according to SpaceX.

View from the VAB of launch complex 39A. 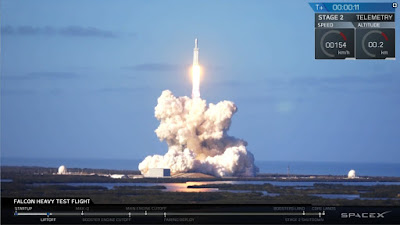 The view from my backyard. 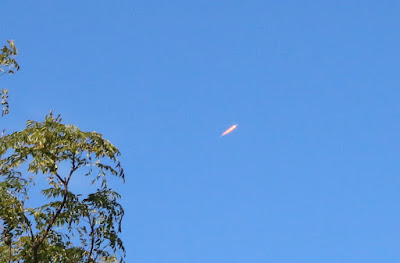 The Falcon heavy is the most powerful rocket to launch from the US since the Apollo Saturn V days.  SpaceX says


When Falcon Heavy lifts off, it will be the most powerful operational rocket in the world by a factor of two. With the ability to lift into orbit nearly 64 metric tons (141,000 lb)--a mass greater than a 737 jetliner loaded with passengers, crew, luggage and fuel.

At this time, SpaceX has said the upper stage has performed two of its three scheduled burns with the last scheduled around 5 hours after the last burn, or around 9:30 EST tonight.

EDIT 2/6/18, 1921 EST:  From Spaceflight Now: "Speaking to reporters at the Kennedy Space Center, Elon Musk says the Falcon Heavy's center core did not survive its descent to SpaceX's drone ship in the Atlantic Ocean."

Posted by SiGraybeard at 4:57 PM