One of the conclusions I had last time was:
They have a gain compared to something.  If you think about it, the conclusion is that antennas can be chosen for the purpose you want.  For example, there's a lot of talk in the gunny community about NVIS antennas.  NVIS is "Near Vertical Incidence Skywave", an extremely long-winded way of saying, "for local communications", and it's done in High Frequency (shortwave) bands that are usually thought of as being for long distance, while VHF/UHF is thought of as being for the local communications.  Low angles of radiation reach the ionosphere farther away than waves at higher angles or those going straight up.  If the atmosphere is dense enough, the vertical waves reflect more or less straight down, allowing communications in shorter distances than antennas radiating at low angles while the low radiation angle waves end up much farther away.  NVIS is great for getting over hills or mountains without needing directional antennas on both ends and a repeater on the mountaintop.  How do we make one?  Simply put a horizontal dipole close to the ground. 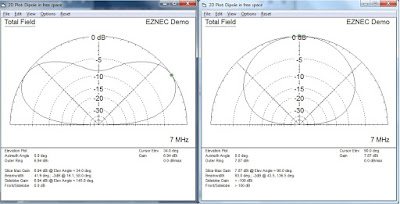 The thing is, this doesn't have to be a separate antenna, if you can raise and lower an existing dipole you can make any dipole into an NVIS antenna.  Raise and lower one with pulleys on poles?

All simulations like this are never going to be right if you have your antenna in the midst of trees, or surrounded by things like a metal roof - which is a perfect ground at frequencies where the antenna is around half the dimension (length or width) of the roof.  Fun fact: guys who study the effects of things close to the antenna say living trees are more like a person in the field than lumber.  Trees are full of water, more like people than lumber, which is dried.

Pattern distortion is an especially big concern for vehicle-mounted antennas.  Trunk mounted antennas are very popular for mobile operating.  The roof is a better mounting spot (if you can get in your garage!).  Lots of money has been spent on simulating and measuring antenna patterns on vehicles by militaries and governments all over the world.  You may think you're getting a wonderful, clean, little doughnut pattern like theory says, but when you put it on your car, if the base of the antenna isn't several wavelengths away from metal, you probably get a lumpy, bumpy pattern with all sorts of weaker and stronger points in it. 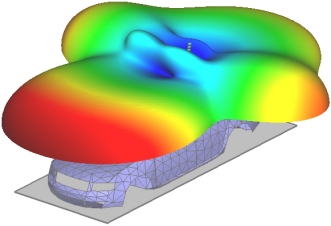 Field from a rod antenna on the roof of a car; advertising post by EMCoS  Warmer colors (red, orange...) denote stronger fields, cool colors (green to blue) denote weaker fields.  This is actually pretty good, but the antenna is on the roof.

Finally, should you be concerned about SWR - Standing Wave Ratio (pdf warning)?  I'm of the opinion that hams worry too much about this but I also know most solid state radios reduce their output power to protect themselves from the reflected power and some shut down at lower reflected powers than others.  I have a radio with a builtin antenna tuner, and I have an external antenna tuner;  I use them without hesitation.  If my radio is happy, I'm happy.  It's true that the best place for a tuner is at the antenna, but I don't personally have the budget of an aircraft developer, all of whom build in an antenna tuner at the bottom of all their HF antennas as part of the aircraft design.  The main disadvantage of an SWR that's "too high" is that power is lost in the antenna's feed cable.

Antennas can be mind-bogglingly hard to measure in the field, because of the way they interact with the everything.  Antenna design is a perfect example of the inflexibility of the laws of physics.  There's over a hundred years worth of experience with them to learn some lessons from.