You'll find that most transmitters are designed to operate with a transmission line system of 50 ohms, and it's a circuit law that the best power transfer occurs when the transmitter, cable and antenna are all matched to that 50 ohms.  The antenna tuner can transform the impedance the transmitter sees at the end of the cable to something closer to 50 ohms so that full power can be transferred.

Antennas convert the power that's delivered to the terminals into electromagnetic waves; they also convert electromagnetic waves that strike the antenna into (much smaller) received powers.  They don't do this equally in all directions and there are two concepts to introduce here that so intertwined, they're almost one and the same.  The standard dipole antenna has a pattern that looks like a squished sphere; the radiated signal is weaker straight up and straight down than it is toward the horizon.  The pattern is shaped sort of like a doughnut.  This illustration, from an old Byte magazine article, shows it well.

The wire is vertical in the top illustration (red), so the pattern is strongest broadside to the wire and at right angles to the direction the wire runs.   The bottom left is looking at the end of the wire, sticking into and out of the screen.  This pattern is with the antenna alone in the universe (or not within a few wavelengths of anything else).  The pattern will be distorted in your yard or any real place, unless you have it very high and far away from other things.

I want to call your attention to the blue numbers on the bottom.  It says the dipole has gain of 2.17 dB, that is, it's 1.65 times stronger than the reference.  (It doesn't say dBi but that's pretty much the published gain of a dipole compared to a perfect isotropic antenna, radiating equally in a sphere.)  I talked about this concept in the article on radio charging batteries.  The dipole only has gain compared to one of these imaginary, isotropic radiators.  The radiation pattern of a quarter wave vertical is very similar, except that in the side view (bottom right) it cuts off at zero degrees elevation because that's the reflecting ground plane under the vertical.   Ideally (perfect reflecting ground), it has maximum gain toward the horizon.   The gain of the quarter wave monopole depends on how big that perfect reflecting ground under the antenna is, and can actually exceed the dipole gain.

Antenna gain always works to create gain by forcing signal from some directions into another.  It's the same way as you can squeeze a balloon and force more air in one place by making the part you're squeezing smaller.  In the case of the dipole over the isotropic radiator, the signal that would go straight up or down is pushed out around the perimeter.  It has less gain than the isotropic radiator along the up/down axis (bottom right) and more around the edges of the doughnut.  Imagine having a spherical balloon and you squeeze it vertically, making it smaller top to bottom; it will get larger in diameter.

A commonly used antenna takes several half wave dipoles and by spacing them properly, along with making them slightly longer or slightly shorter, produces gain in one direction.  This is called a Yagi array (more properly a Yagi-Uda array) named for the researcher(s) who developed this almost 100 years ago (1926). 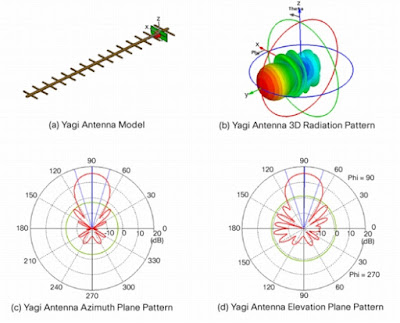 (source)
Notice that the biggest part of the pattern, the front lobe, goes past 10 to perhaps 15 or 16 dB.  Compared to what?  Gain is always a comparison between two things, so with nothing noted in the drawing we just don't know, but as I said in that battery-charging article, it's probably dBi because it produces bigger numbers than dB compared to a dipole and bigger numbers sound better.

Let's say that's 15 dB gain, which in linear terms is 31.6 times.  If I put 100 watts into the antenna, how much power is in that lobe?  If I put 100 watts into the antenna, it puts 100 watts into that lobe.  (Yes, that was a trick question)  That gain of 31.6 times only means that compared to an isotropic radiator the signal is 31.6 times stronger.  An antenna can't add power, adding power requires power.  All the antenna can do is squeeze signal from other directions and force it to the front.  Notice that there are lobes on the back of the antenna and all of them are weaker than -10 dB; 1/10 of the power is in the strong points off the back of the antenna.  That's the power that got pushed into the main, 15 dB-gain lobe.

Think about those battery charging systems again; they might like to generate pencil-point sharp radiation patterns, but if they're radiating power levels that are safe, all they can do is minimize the power in unwanted directions.  They can't increase the power delivered to the thing being charged with any antenna tricks. 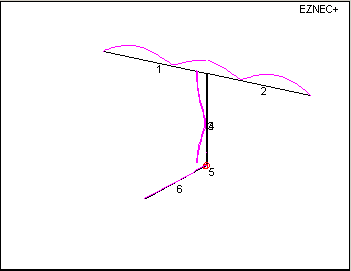 Example of an antenna that's 3/2 (three halves) wavelength long, center fed.  The pink traces show the current peaks in the center, nulls at 1/4 wave (just between the first two nulls is a 1/2 wave dipole) and then repeat an additional half wave on each side.  This is the popular G5RV antenna.  This shows that antennas that are an odd number of quarter wavelengths on a side still fit the signal well.  They also produce impedances near the desired 50 ohms.  The drawback is that as the antenna gets longer, the radiation pattern changes to something less like a doughnut.  The pattern turns into lobes along the wire getting closer to the wire as the wire gets longer.